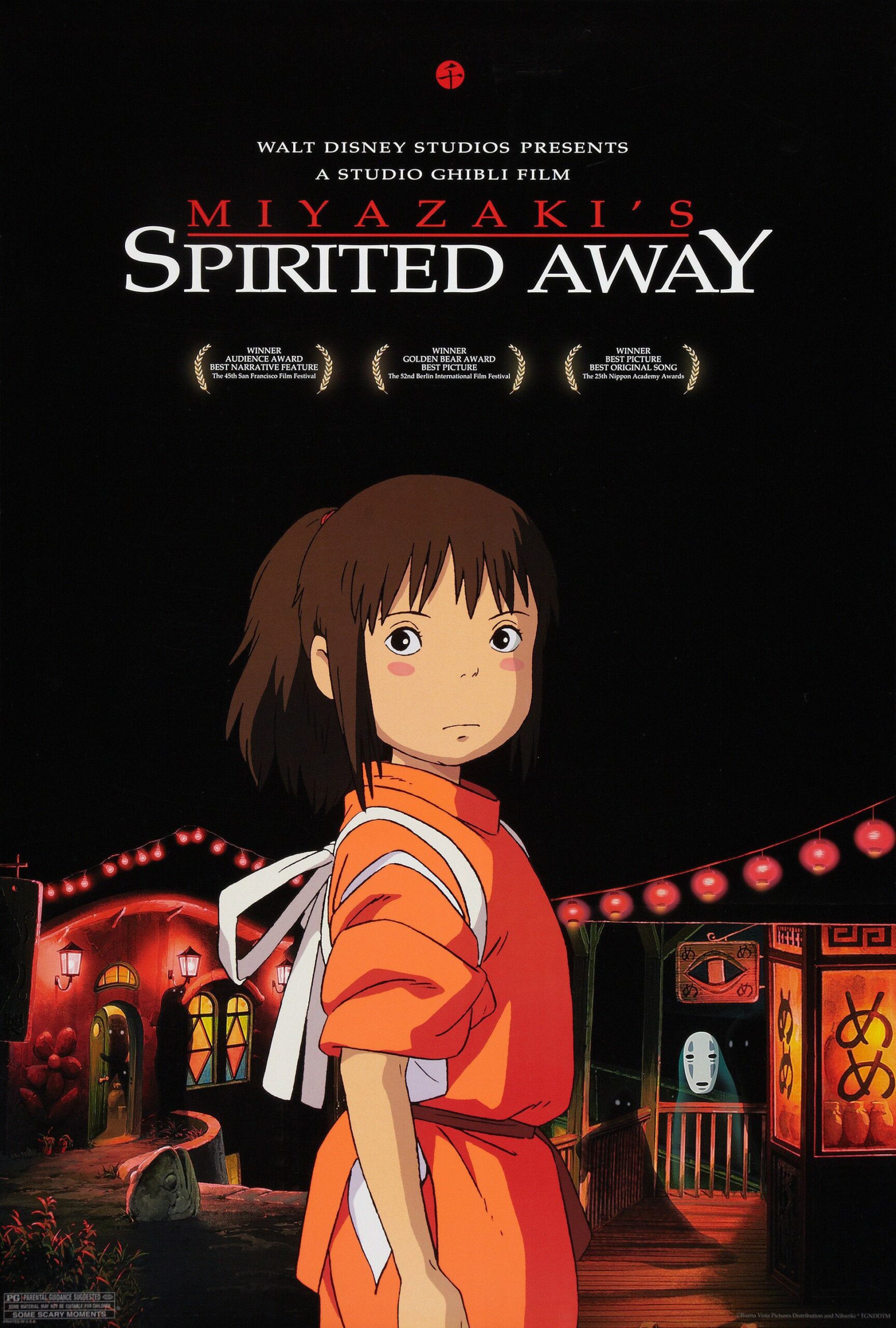 If you are an anime lover, you would have heard of or watched Spirited Away. Spirited away is an Oscar award-winning Japanese movie written by the talented Japanese writer Hayao Miyazaki, and it was animated by Studio Ghibli. It is one anime series that has garnered a lot of fans. In this article, we’ll look at movies like Spirited Away.

What is Spirited Away About?

Spirited Away tells the story of a ten-year-old named Chihiro who went on a journey with her parents. They end up at an abandoned amusement park where supernatural beings live. While she was busy admiring the park, her parents ate the food in a strange restaurant.

She realized her parents had turned into pigs when she got back. To rescue them, Chihiro had to work for a witch at the park. Spirited Away was made over two decades ago, and it has set a good foundation for anime lovers.

However, in all these years, other animes like spirited away, have been created,

This is another movie directed by the talented Hayao Miyazaki, the director of Spirited Away. It’s based on a British novel bearing the same title. Howl’s Moving Castle tells the story of Sophia, who is the protagonist.

A witch cursed Sophia, and she turned into an unrecognizable older woman. She seeks a way to turn herself back to normal. In her search for ways to break the curse, she leaves home and enters a moving castle. In the castle, she meets a wizard howl, an apprentice Marki and a fire demon Calcifer.

Sophia told Howl of her interest in working as a cleaner in his castle. Howl finally finds out about the curse, and he eventually falls in love with her and looks for ways to help her break free from the curse.

Children Who Chase Lost Voices was directed by the talented Makoto Shintai. This movie tells the story of a young girl named Asuna who loses her dad. Before her dad died, he left radio for her.

While Asuna was listening to the radio, she heard strange music coming from it. She meets a boy named Shun. Shun saves her from a creature in the forest, becoming friends.

Shun dies suddenly, and Asuna is once again left devastated. She goes on a journey to the underground world of Agartha, where she makes new friends, enemies, and a lot of supernatural elements.

This movie is a story of loss, grief, and friendships, and just like Spirited away, the protagonist is a young girl.

A Whisker Away is a 2020 Japanese animated movie distributed by Netflix. It tells the story of Miyo Sasaki, who has a huge crush on Kento Hinode, though the feeling wasn’t mutual.

Miyo isn’t shy about showing how she feels about Kento Hinode. She gets a magical mask from a strange mask seller, and with the aid of the mask, she turns into a cat. As a cat, Miyo gets even closer to her crush, Kento.

When she had her problems at home, she gave Kento listening ears as he also shared the problems he was facing at home. For Miyo at home, she finds it difficult to adjust to a new life with her stepmom and father.

Prince Ashitaka eventually tells the villagers what happened. They searched and discovered that the demon was a boar god and Ashitaka had to go into the lands of the boar gods to find a cure for the curse.

On his journey, Ashitaka discovers a war between the industrialist humans and the forest gods. He then tries to proffer peace between the warring parties.

Like Spirited away, the protagonist in Princess Mononoke was also searching for a cure for a condition.

Directed by Hayao Miyazaki in 1989, Kiki’s delivery service is an adaptation of the novel written by Eiko Kadono, which bears the same name as the film. This movie is centered on Kiki, a 13-year-old girl and a witch apprentice who is on her compulsory year of freedom.

She tries to figure out her life as she takes up a part-time job at a bakery. She then opens her delivery business, using her flying ability to make more money. This movie takes us on a journey showing us how Kiki overcomes distinct challenges that she faces on her way, just like Chihiro in Spirited Away.

Directed by Hiroyuki Morita, the cat returns is a spinoff of Miyazaki’s 1995 movie “whispers of the heart’. The cat returns the story of Haru, a schoolgirl who saves a cat’s life and is a prince.

She gets a surprise engagement to the prince as a reward from the cat king. To get herself out of this arrangement, she demands the help of different cats, the large white cat named Muta, the cat figure Baron Humbert Von Gikkigen, and the living stone raven band, Toto.

Unfortunately, they are all stuck in the cat kingdom, and Haru has to look for another means of escape to avoid being trapped forever. Like spirited away, the cat also has a female protagonist searching for a way to get out of a dangerous situation.

7. When Marnie was there.

When Marnie was there is a psychological drama that could confuse if not followed carefully. It tells the story of Anna. Anna had a sudden asthma attack, and the doctors advised her parents to take her to the countryside.

Anna was sent by her stepmother to a relative’s place while in the countryside. Anna became obsessed with an abandoned mansion where she met a blonde girl named Marnie.

Anna and Marnie became friends, and they kept their friendship a secret. A new family moved into the mansion after a while, and one of them, named Sayaka, gave Anna a diary when she came to look for Marnie.

In the diary, Marnie wrote some viral information, and from what was written in the diary, Anna eventually found out that she was her granddaughter of Marnie.

Ponyo tells the story of the son of a sailor named Sosuke. Sosuke is a five-year-old living on an Oceanside cliff with his mother named Lisa. One day Sosuke caught a goldfish trapped in a glass jar and named his goldfish Ponyo.

Ponyo is originally named Brunhilde, and she is the daughter of Fujimoto, who was once a human scientist. Brunhilde lives with her father in a submarine with the rest of her siblings.

Brunhilde is obsessed with living in the outside world, so she sneaked out from home one day. Unfortunately, she was caught and trapped in a glass jar that floated to the shore.

When Sosuke broke the jar to rescue Brunhilde, he injured his hand. Ponyo’s father finally gets her back home. She uses her magical powers to turn herself into a human with Sosuke’s blood.

Pan’s Labyrinth was directed by Guillermo del Toro. It tells the story of a 10-year-old girl named Ofelia who lives with her stepfather, a tyrant army officer, and her pregnant mother.

Ophelia explores a decaying Labyrinth to escape her loneliness. The Labyrinth is guarded by a mysterious Faun, while in the Labyrinth, Ofelia is on long trips, and she meets many strange creatures.

Faun claims to know Ofelia’s destiny and gives her tasks to complete. He tells her to complete the trials to gain immortality. Like in Spirited Away, the protagonist of Pan’s Labyrinth is a girl, and they both have encounters with the mystical world.

10. The Girl Who Leapt Through Time.

Mamoru Uda directed this movie in 2006. It is an adaptation of the novel by Yasutaka Tsutsui, which bears the same name as the film.

The Girl Who Leapt Through Time tells the story of Makato Kinno, a 17-year-old high school student with her friends Chiaki and Kosuke. After a near accident case, she gained the ability to time travel. Makato used her ability to solve small personal problems and various other problems.

However, she came to realize that her decision had dangerous outcomes.

Spirited Away is such a classic, pushing anime beyond the Japanese market to other countries with a record of being one of the highest-grossing anime. It is in a class of its own. So if you’ve watched it and want more, then these movies on our list are your best bet.