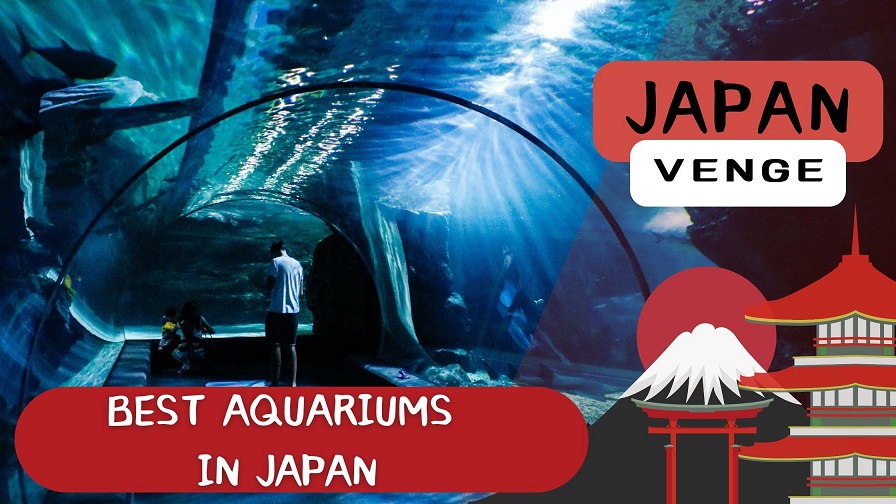 Aside from visiting authentic Japanese restaurants and famous city attractions, you can also enjoy your time touring some of the Best Aquariums in Japan!

Speaking of aquariums in Japan, I know you might be quite muddled as to which is worth visiting, Okinawa Churaumi Aquarium, Kamogawa Sea World, and Sunshine Aquarium are famous, but where should you go?

This time, I will introduce the popular Aquariums in Japan to help you choose the best ones to add to your itinerary.

10 Popular Aquariums in Japan to Visit

The museum is divided into 12 themed zones, and one of its major features is that visitors can freely view the museum without worrying about the route. There are many marine mammals such as dolphins, sea lions, and sea otters.

A large glass dome that is 30.7 meters above the ground is drawn.

Underneath, you can see more than 600 species of sea creatures from around the world, including bluefin tuna swimming in groups in a 2,200-ton donut-shaped tank, and penguins swimming around in Japan’s largest penguin.

The park attracts visitors with creative exhibitions that make the most of the limited site and seasonal events. Always entertaining.

You will be amazed at the production using lights and sounds that you would not expect from an aquarium.

Inside the museum, you can appreciate exhibits with different concepts for each area, such as the Jellyfish Rumble, a colorful jellyfish aquarium that looks great in photos, and the Wonder Tube, where you can see the scenery as if you were walking in the sea.

The most popular activity that “Sumasui” has to offer is the dolphin show. In the summer, you can interact with dolphins on the adjacent beach, and in addition to dolphins, there are many opportunities to experience feeding and interacting with seals, penguins, tortoises, sea otters, and more.

Hakkeijima Sea Paradise is a complex leisure facility in Kanazawa Ward, Yokohama. It is a popular spot where you can enjoy In particular, the aquarium near the entrance displays more than 70 species of sea creatures.

The area is divided into 4 areas according to the theme, and the exhibition method is designed in various ways, so everyone from children to adults can enjoy it as if they were children.

READ MORE:  Why Japan Is Prone To Earthquake.

Kamogawa Sea World is the largest aquarium in Chiba, Japan. The habitat of sea creatures is maintained according to the natural environment. It is a marine leisure land where you can see the unique appearance of these creatures.

One of their popular activity is the Sea Animal Show, where sea animals such as sea lions, dolphins, beluga whales (beluga whales), killer whales, and other sea animals present a powerful show.

In particular, the killer whale show is said to be the best in Japan and is highly popular.

Sunshine is an oasis-like space where you can appreciate many creatures. It is not just an exhibition, but the exhibition that shows the animals and fish-likeness is a big attraction.

Flying penguins that look like they are swimming in the air, and a variety of fish that swim among the vivid coral reefs, are displayed in a way that you won’t find anywhere else.

The Port of Nagoya Aquarium, located in Minato-ku, Nagoya-shi, Aichi Japan is one of Japan’s leading aquariums, and killer whales are rare in Japanese aquariums.

It is also famous for raising Arctic beluga whales and beluga whales. They also hold many events such as dolphin shows and fish feedings.

Osaka’s representative tourist spot, Kaiyukan is a popular aquarium where you can meet giant whale sharks swimming leisurely, ringed seals that have become a hot topic on social media when they are too round, and photogenic jellyfish.

After 5:00 pm, the lighting and background music change, making it a fantastic healing space perfect for a date.

It is popular as a spot where you can enjoy experiencing history and culture and interacting with dolphins.

In the “Coral Sea” tank where the sunlight is pouring in, you can see large-scale coral breeding exhibits, and you can see the whale shark, the largest fish in the world, and the manta ray, which has successfully bred for the first time in the world. ”, and the “deep sea” tank that reproduces the mysterious deep sea of ​​Okinawa, where you can experience the sea of ​​Okinawa as a whole.

Where is the Best Aquarium in Japan?

So far, I have introduced the popular recommendation of Japanese aquariums. Have you decided which aquarium to visit yet? Make the most of your time while you’re visiting Japan!