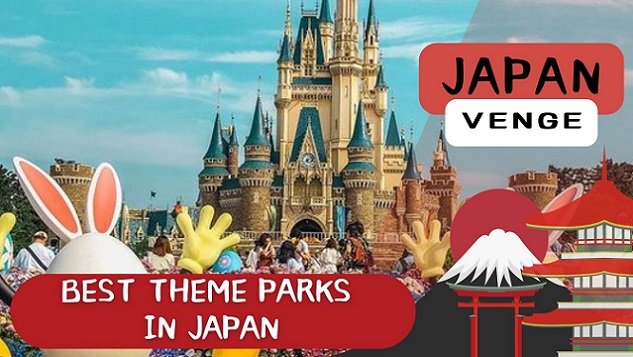 There are theme parks and leisure lands all over Japan that can be enjoyed by children and adults alike.

If you’re looking for the Best Theme Parks in Japan to visit, scroll down to this post this time, I will introduce popular theme parks in Japan to give you an idea as to where you should go with your family and friends!

Catchphrase: The Kingdom of Dreams and Magic

The annual number of visitors is about 16 million, which is the largest in Japan, and among the world’s theme parks and amusement parks, the Magic Kingdom of Walt Disney World Resort in Florida and the Disneyland Park of Disneyland Resort in California. It is the third largest theme park in the world.

There are seven themed lands: World Bazaar, Tomorrowland, Toontown, Fantasyland, Critter Country, Westernland, and Adventureland. It is a place that values ​​“dreams” very much, and it is characterized by the fact that clocks and other items that return to the real world are kept to a minimum.

A Theme Park where you can feel the World

Catchphrase: Bring you the best of the world

Established in 2001 as a “theme park where guests can fully experience the world of Hollywood movies such as ‘Jaws’ and ‘Jurassic Park: The Ride’ through rides and shows that exceed the expectations and imagination of guests.” This popular theme park opened on March 31st.

In the “Wizarding World of Harry Potter” area where you can experience the world of “Harry Potter”, “Hogwarts Castle”, which is the base of the story, is reproduced, and “Hogsmeade Village”, the town where wizards live.

You can enjoy attractions that are even more enjoyable if you go after seeing the “Harry Potter” movies, such as being able to cast a spell on the There is also a “Minion Park” featuring the popular character “Minions”.

In addition, the ride attraction “Minions Hachamecha Ride” is a recommended attraction for people who like “Minions” because you can ride the attractions while enjoying the images.

READ MORE:  Ghost Towns in Japan - Are there?

Catchphrase: To the Sea of ​​Adventure and Imagination

Tokyo DisneySea is an ocean-themed Disney park that adults can also enjoy. Annual visitor numbers are about 13.5 million, making it the fifth most popular theme park in the world among theme parks and amusement parks in Japan.

In order to differentiate from Tokyo Disneyland, it is operated, targeting adults. For that reason, alcohol is sold at some stores, and shows such as “Big Band Beat” that adults can enjoy are also held.

Screaming and Horror are the best in Japan

In particular, the four major coasters “FUJIYAMA”, “Do*Dodonpa”, “Eejanaika”, and “Takabisha” boast world-class specs and are visited by many fans from all over the country.

In addition, the world’s largest haunted house “Most Scary Shivering Labyrinth” is also very famous. This theme park is recommended for those who like screaming and horror.

Tokyo Joypolis is one of the largest indoor theme parks in Japan and is a popular theme park with more than 20 types of attractions, such as screaming coasters and VR using the latest technology.

On the main stage, using the latest technology such as lasers, lighting, projection mapping, and sound systems, an original video show that can only be experienced at TOKYO JOYPOLIS that fuses video, light, and sound will be held. You can enjoy a fantastic and advanced entertainment show with colorful productions.

Tokyo Dome City Attractions is an urban amusement park located in Tokyo Dome City. It opened in 1955 as “Korakuen Yuenchi exit_nicovideo” and changed to its current name in 2003.

A hero shows of the Super Sentai series is being held, and the phrase “Shake hands with me at Korakuen Yuenchi!” has become a famous phrase.

It is also the origin of cosplay events, and it is a popular theme park that hosts “Cosplay Festa”, attractions, heroes, and events.

Opened in 1964, Taiyo no Hiroba is located on a vast site along the slopes of the southern part of the Tama Hills and features attractions such as thrill rides, a Ferris wheel, and go-karts.

It is a popular theme park where you can enjoy the four seasons, with illuminations on winter nights, and a multi-purpose hall. In 1999, the ropeway “Sky Shuttle” was opened as a means of transportation, and major renovations were carried out, including the rebuilding of the entrance section.

It was expanded, and on February 6, 2019, a new plan was announced, including the construction of a new aquarium incorporating virtual reality.

KidZania Tokyo Co., Ltd. is in Urban Dock LaLaport Toyosu in 2-chome Toyosu, Koto-ku, Tokyo. This theme park is an experience-based commercial facility operated by KCJ GROUP Co., Ltd. Everything in the facility is built to two-thirds of the actual scale, allowing children ages 3 to 15 to enjoy a variety of work experiences.

KidZania is a “town where children play the leading role” where they can learn about the structure of society while having fun. There are 100 kinds of jobs and services that can be experienced, using authentic equipment and tools, and children can do various things like adults.

You can also experience work and services. You can get almost everything you experience. You can actually eat “food” such as pizza and soft serve ice cream. You can take home a “DVD” that contains “productions” and your own activities.

READ MORE:  What are the Major Department Stores in Japan

There are plenty of attractions that you can ride, see, feel and enjoy, as if embodying “LEGO”, which is derived from the Danish word “leg godt”.

Although it is aimed at children aged 3 to 10, it is a Lego block theme park where accompanying adults can return to their childhood and enjoy it from a child’s perspective.

From 16:00 on the 5th of every month (Lego Day) and the last Friday of the month, a special day “Otona no LEGO Night” is held where adults can enter.

Nasu Highland Park is located in the northern Kanto region of Nasu Town, Tochigi Prefecture. It is the largest theme park. The operating company is Towa Nasu Resort, which sells and manages villas in the adjacent land, and is famous for installing various coaster-type attractions under the name of “10 major coasters”.

Nasu Highland Park is known as a dog-friendly theme park. Dogs are allowed in the park, and there is an outdoor dog run on natural grass and an indoor dog run for small dogs only. In addition, you can bring your dog along with you to the attractions.

There are facilities for dogs such as “lead hooks” and “water fountains for dogs” in various places in the park, so owners can spend their time with peace of mind. It is a popular theme park that can be enjoyed by parents and children as you can go with your dog.

So far, I have introduced the top 10 most popular theme parks in Japan. Even if you haven’t been to a theme park yet, you may find something surprising when you actually go there.

How about going on a theme park tour with your family, friends, or lovers?