Many tourists who visit Japan, often purchase Daruma dolls as great souvenirs for their friends and family. Since most of these dolls have iconic drawings that are not cliché, with Japanese inscriptions deeply rooted in their ancient culture.

What many do not know, however, is that the daruma doll means more than that to the Japanese. In fact, it is a traditional Japanese wishing doll, known for its symbol of perseverance and luck. It might look funny, but it is by far an important part of their culture.

Are you interested in knowing what these dolls represent in Japanese culture? Well, this post will tell you all you need to know about Daruma dolls. 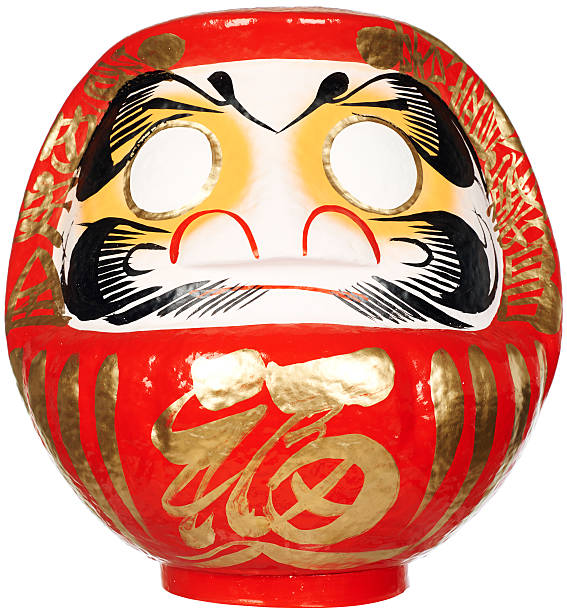 What are Daruma Dolls?

The Daruma doll first and foremost is one of the symbols of Japan. It represents perseverance and follows a long history, heritage, and origin of the Japanese tradition. It is more of a talisman than a doll to locals as it symbolizes a good luck charm for them.

You would most likely see one or two of these dolls placed nicely on shelves of farmhouses, mom-and-pop shops, as well as tatami-filled homes in Japan. A daruma doll is typically round, and hollow.

This traditional Japanese doll is modeled after Bodhidharma, founder of the Zen tradition of Buddhism. It depicts the face of a bearded man and is typically red. It may, however, vary in color and design depending on the artist who makes it.

The daruma doll serves as a goodwill message and is a popular gift for encouragement in Japan. Many Buddhist temples use this doll as well. The creation of this doll is considered an art of its own.

The legend behind Daruma Dolls

It would be a disservice to purchase a daruma doll and not know the story and legend behind its emergence. The daruma doll’s history and origin date back to a monk called Bodhidharma, the founder of Zen Buddhism.

Bodhidharma was credited for introducing Shaolin kungfu, Zazen (a type of meditation), and green tea. It is believed that centuries ago, he brought the Buddhist religion to China. Journeying across the country to find a suitable place in a cave to meditate. This meditation story is quite as interesting as it is motivational.

While in this cave, Bodhidharma meditated for a whole nine years in the same position non-stop. With his eyes wide open, staring at a blank wall. This meditation was a day in, day out since he took no breaks. After nine years of meditation, it was said that he lost both arms and legs.

One interesting thing happened on this journey. While on the same spot, he was able to meditate without closing his eyes until the seventh year. Out of anger and frustration, he cut off his eyelids so he would never have to close his eyes again.

The sitting position he took all these years made his limbs wither which led to him losing both arms and legs. His commitment and perseverance for enlightenment led to him losing his body which fell by the sideway and disappeared, yet his undeterred spirit remained.

When you come across a daruma doll, you would notice these features in it. A bearded man without hands, legs, and eyelids. It is the motivation, determination, and perseverance of this Buddhist legend that the Japanese imitate in their belief and representation of the daruma doll.

Features and significance of the Daruma Doll

The daruma doll is made of washi, a Japanese hand-made paper designed only in winter. It has a hollow middle which makes it stand upright and bounce back up when pushed or tumbled. It has this stern look that represents concentration towards achieving a goal.

The features of the daruma doll are deeply rooted in the story of the Zen Buddhist founder, Bodhidharma. These features most importantly include the eyes, no limbs, eyebrows, and mustache.

One thing you should know about these dolls is that they are handcrafted in a way that no two daruma dolls are the same. Every single one of them has its own distinct, unique feature.

When you see a daruma doll in the market, you would notice a blank eye. This is important because you are given the honor to paint the eye as you choose upon purchase, blessing the eye as a way of gathering good luck on your journey.

The limbless state is another feature of the daruma doll you can’t fail to notice. Just like Bodhidharma, the daruma doll is crafted without hands and legs. This alone shows how much they believe in the history of this legend.

These features which are prominent and loud on the face of the doll make it look goofy and somewhat funny at first. It represents the look of the Zen Buddhist founder as well as confirms the story of him taking off his eyelids.

While this is important for its history, the look represents more than that. If you take a longer and deeper look, you would understand its meaning. The eyebrows reflect silhouettes of cranes while the mustache is shaped like a turtle. These animals represent longevity in Japanese culture. While Japanese cranes live for 1000 years, turtles live for 500 years.

Red is the most dominant color used for these dolls. This is partly because it is believed that Bodhidharma wore red robes. Another significant thing is that red signifies energy and good health and is an auspicious color in most Asian cultures. 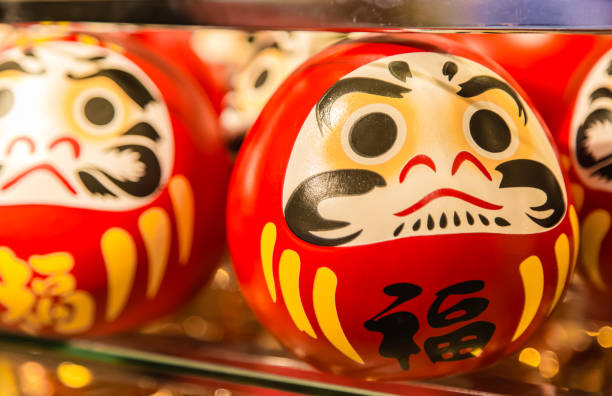 In modern Japan, daruma dolls are commonly used by business owners, farmers, at home, and even by politicians. Since they believe this wishing doll is a good luck charm, you would most likely find it tucked nicely in obvious areas of their stores, restaurants, and farmhouses.

For politicians, they carry their daruma dolls with them, mostly during election periods or for press interviews and speeches. Daruma dolls have become so deeply rooted in Japanese culture that they are even more commonly used in modern Japan.

For Japanese folks, this doll is more than just a doll, it represents a god which helps their wishes to come true. It symbolizes determination for success, patience, sacrifice, and also perseverance.

Most often, a daruma doll is kept for one year but can stay with the owner for longer. After the goal is achieved, it is taken to the temple for burning. This usually happens in the New Year, January. It is an annual celebration called the Daruma-ichi or Daruma fair.

During this celebration hosted by temples like Sharingan Daruma-Ji temple, thousands of Japanese folks flock to the temple to buy new daruma dolls, have them blessed and return the old ones for a ritual burning. There are several temples where this celebration is held in Japan.

Daruma-Ichi is usually filled with Japanese entertainment; a beautiful sight to behold. With food, games, candy stalls, and what have you.

Different daruma colors and their meaning

In recent times, daruma dolls have been made in different colors, each having its significance. You should know that red is the most typical color and most daruma makers believe that it can serve any purpose as long as you have wished for it.

Where to find Daruma dolls

You can find Daruma dolls all over Japan. However, the history of daruma-making dates back to Takasaki, in Gunma prefecture. This town is said to produce over 80% of the daruma dolls distributed in Japan.

How to use a Daruma doll?

The Daruma doll is used to signify good luck. Well, you can call it a good luck charm.

To use a daruma doll is quite simple. First, buy a daruma doll and have it blessed during New Year’s Eve and make a wish. After this, paint one part of the eye of your newly purchased daruma doll.

Work towards your goal every day and when your dreams or goals are achieved, paint the other eye of the doll. Then at the end of the year, take it to the temple where you purchased the doll for a ritual burning.

You should know that the significance of this doll is your ability to work towards achieving your goal, persevering with determination despite the current circumstances. This is why Japanese people wish for goals that are achievable within one year like wishing for success in an examination.

Daruma dolls come in different incredible shapes and sizes. You could either buy a small one or a big one. Most people who purchase big ones are considered stronger believers since their dreams have come true and their goals have been achieved.

As a beginner, you can get a small Daruma doll for a start. If you are interested in this experience, you can visit Katsuoji temple which is located just outside the city of Osaka.