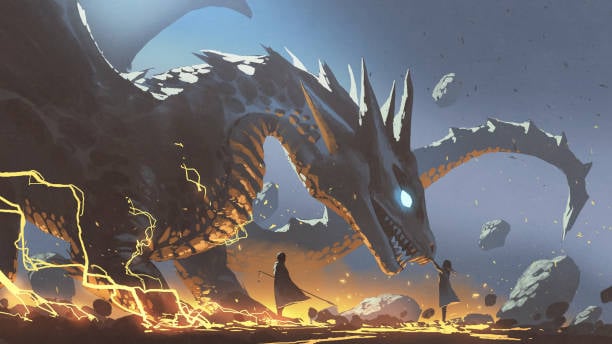 Dragons are an essential part of Japanese mythology and folklore. In fact, temples and shrines in Japan have been built to honor these legendary creatures.

Japanese dragons, also called Tatsu or Ryu, are known for fierceness. They symbolize strength and power. What’s more, it is believed that dragons represent a perfect blend of good and evil. Japanese dragons are water creatures and live in the sea mainly because Japan is an island nation.

In Japanese mythology, it is said that some of the first appearances of dragons began in Kojiki (680 AD) and Nihongi (720 AD). Kojiki – the Records of Ancient Matters and Nihongi, repeatedly mentions the Japanese dragons in many ways. In these documents, water deities take the shape of dragons. It is also said that these dragons are one of the four creatures from heaven. 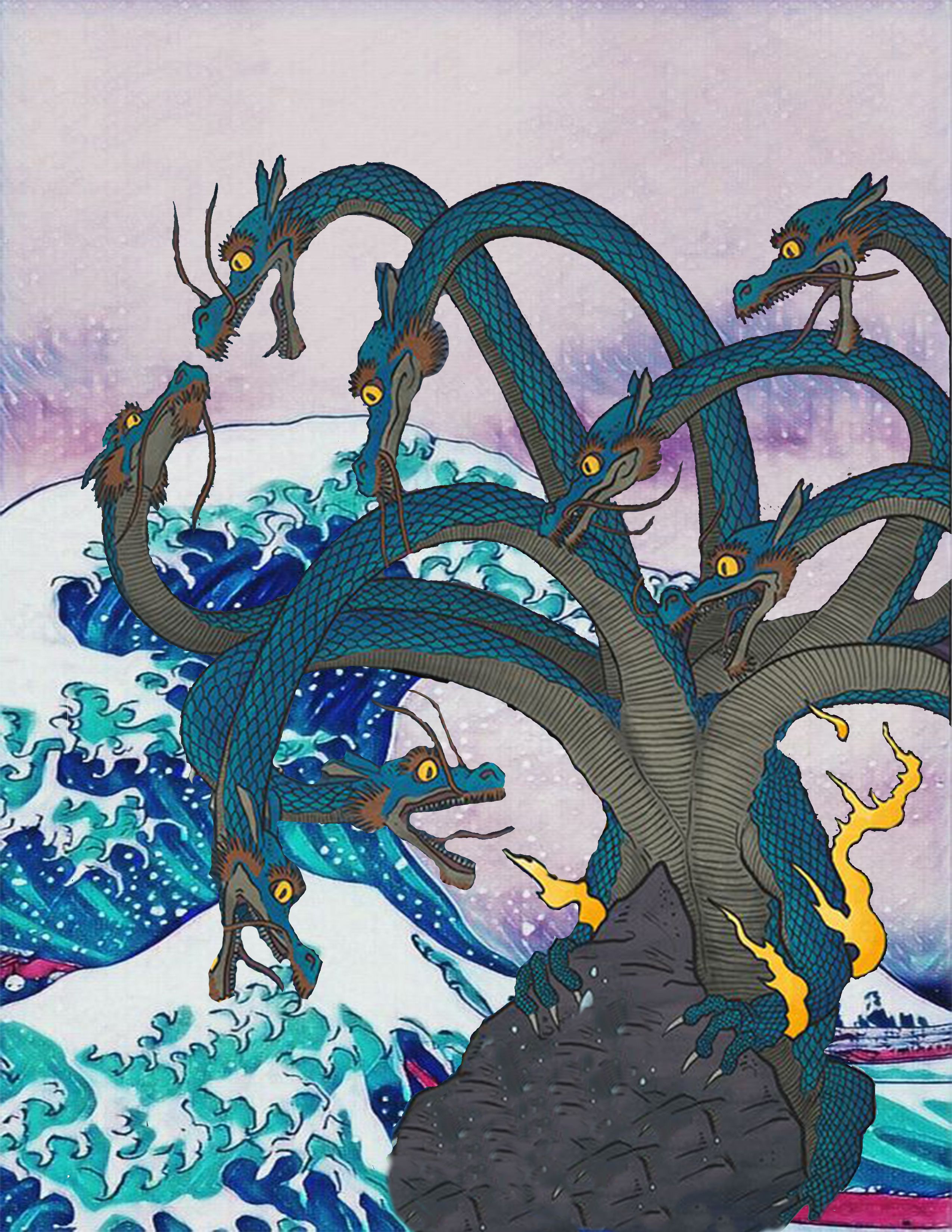 According to the legend, the eight heads represent an element – water, fire, earth, darkness, wind, light, poison, and thunder. His eyes are bloodshot red, and his size equals eight mountains and eight valleys.

It is said that Orochi ate young virgin girls. However, it was eventually killed by Susanoo, the fallen god. Susanoo tricked Yamata no Orochi into becoming drunk on sake. Orochi lived in a region close to the mountains called Tokikami, located in the land of Izumo.

It is said that it lived in the mountains, so no one found it. This eight-headed dragon in modern times has appeared in anime series like Naruto, “kannazuki no Miko ” and “blue seed”. It also features card games like Yu Ji ho and video games like “Final fantasy I” as an evil character. 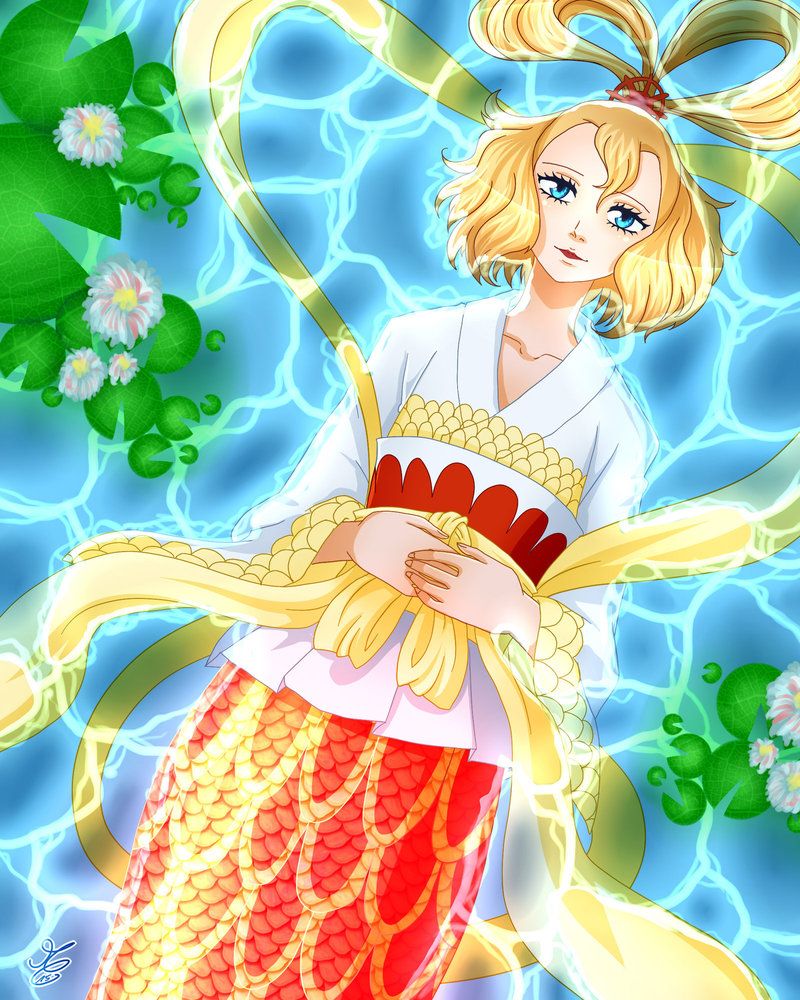 Otohime is known as the dragon princess. She protects the seas of all Japan. As one of the characters of Japanese mythology, Otihome is famous for her incredible beauty. She is the daughter of Ryujin, the Shinto god of the seas. Otihome, much like her father, can turn into a human at will.

It is said that she married the god Hoori, son of Konohana, and Ninigi, protectors of heaven. The love story of Otohime and Hoori began when he and his brother Hoderi went fishing in the sea. Several of their hooks fell to the bottom, and Hoori went into the water to pick them up.

While diving, he saw Otohime. They both fell in love at first sight. And without much thought went to Ryugin for his blessing to get married. Not long after, they had a son. While giving birth, Otohime turned into a dragon.

Ryujin is another famous Japanese dragon with great importance in Japanese culture for centuries. Also known as owatatsumi no kami, this dragon is the protector of the seas all over Japan.

Ryujin is a docile character, but he is very dangerous when angry. He has a large mouth that can swallow anything around it. He also can change into a human, whoever he pleases.

According to legends, Ryujin lived underwater in a palace of red and white corals and decorated with powerful precious gemstones. He was surrounded by sea animals such as turtles, fish and jellyfish, his servants. One popular story is the story of Ryujin and the jellyfish.

It is believed that Ryujin served as a guardian for the Shinto religion. One of the Shinto legends said that the magic gemstones in this palace helped the Japanese empress Jingu defeat Korea. The Gion Matsuri at the Yasaka temple was put up in memory of this story. 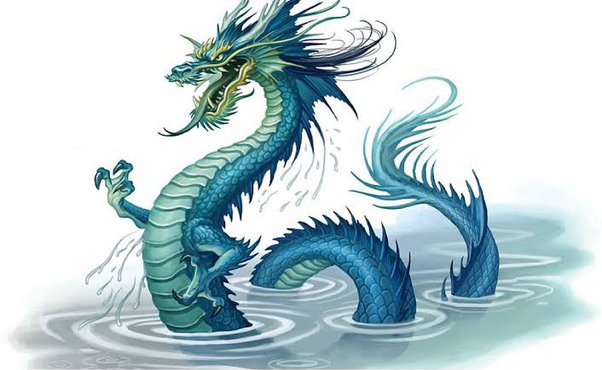 Mizuchi is a four-legged water dragon that lives in the Kawashima river. It is said that this hornless dragon would kill travelers passing by the river by spewing out venom. One day, an ancestor of the Kasa no omi clan known as Agatamori proposed a challenge to Mizuchi.

During the challenge, he cast three bottle gourds into the river. The gourds remained afloat. He tasked Mizuchi to sink these gourds, or else he would slay him. Mizuchi tried all he could. He even shapeshifted into a deer but was unable to sink the gourds.

Agatamori then slew Mizuchi and other dragons in the sea. It is said that the river turned red ever since because of the dragons that Agatamori killed. Since then, the river has been called “the pool of Agatamori.”

In modern times, Mizuchi appeared in the anime “Omamori Himari” as the character Suzuki, a girl who has dragon powers, and in video games like “Monster Hunter 2” and “Ma-jong Fight Club“. 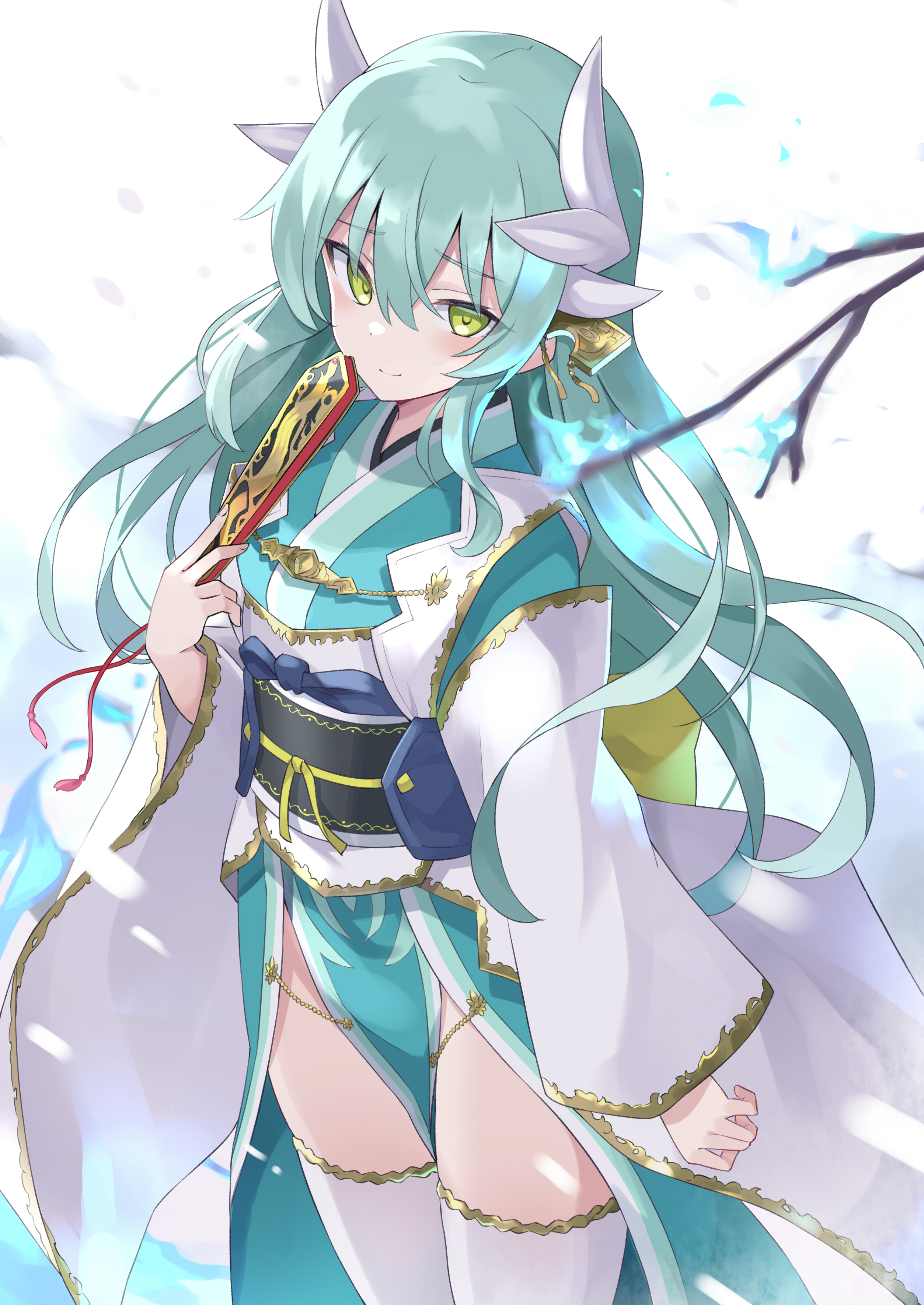 Another famous Japanese dragon is Kiyohime, the purity princess. Kiyohime was said to be the daughter of Shijo, a village headman. Her family was known to be wealthy and provided lodging for traveling priests.

The Kiyohime’s tale is about a handsome priest named Anchin who fell in love with the beautiful girl Kiyo Hime. Anchin later fought his urges and decided to stop meeting with Kiyohime again.

This pained Kiyohime. She couldn’t understand his change of heart and went after him in full rage. Both lovers crossed paths at the Hidaka River. Anchin asked the boatman not to allow Kiyo Hime into the boat.

When she realized his plan, she swam towards him in great rage and turned into a full dragon breathing fire. While some believe Kiyohime was a young woman, others believe she was older. What remains certain is that Kiyohime was a vengeful character. 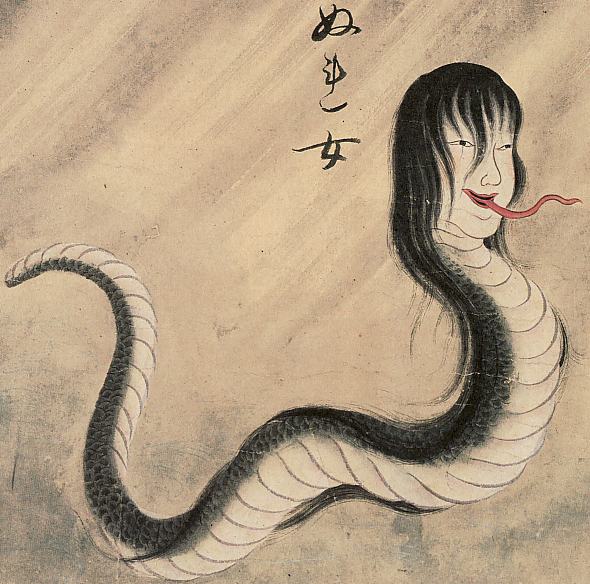 Nure-onna is famous for being half yokai and half dragon in Japanese folklore. Nure-onna is a dragon with a woman’s head and the body of a snake.

She is said to change her appearance to deceive people who cross her path and kill them. Nure-onna lives in water and sometimes appears at the riverbank, pond, or beach. According to legends, this dragon is mainly found in Nagasaki prefecture but has also spread to other parts of Japan.

Nure-one is also known for her long black hair. She deceives her victims by pretending to be a drowning woman. When they try to save it, it drags them into the water. Other stories say this dragon speaks gentle words or laughs at its victims.

The 7th most famous Japanese dragon is toyotama-hime. She is the daughter of Ryujin, the dragon god of the sea. Toyota-hime is believed to have morphed into a dragon as she gave birth. This dragon married a Prince who rescued her from a gang of thieves.

They lived in the underwater palace until Hoori got tired and decided to come to land. When Toyotama-hime was born, Hoori sneaked in to witness her transformation toyotama became furious and never came to land again.

She gave her son to her younger sister to take care of. Her son finally gets married to Tamayori (her sister) and gives birth to Jimmu, who became emperor of Japan.

Kuraokami is the Shinto deity of rain and snow. This dragon is considered to be one of the gods of nature. In Japanese, Kura means “dark” and refers to rainy clouds.

In Japanese mythology, the birth of kuraokami came about after Izanami died giving birth. His brother was so furious that he cut his nephew Kagu-tsuchi into three parts; the fire deity who caused the death of his brother, creating the three dragon brothers.

Kuraokami is believed to be one of the three. He is seen as a peace-loving dragon that represents the rain. Kuraokami is loved and revered in Japanese Shinto temples.

Zenyo is another famous Japanese dragon known as the rain dragon in Japanese mythology. According to the Buddhist religion, zenyo was invoked in the 9th century by a priest in the Kyoto imperial palace.

Zenyo is a caring dragon who sends precious rain to the people to grow their crops. He is often a dragon with the human form and dragon tail. Zenya is mentioned in many books within the sacred scriptures, pictures, and fresco paintings of many ancient temples.

Much like others, the Azure Dragon is one of the mythical protectors of Kyoto, famous for protecting the eastern part of the city. Many temples are built in his honor. The most popular is the Kiyomizu temple. The temple holds a ceremony every year to worship the Azure dragon.

In Japan, dragons are good-luck bearers and protectors. They represent strength and are of great importance to Japanese mythology and folklore. Some of these dragons have been featured in modern-day Japanese video games, anime, and manga series. Meaning Japan holds its history, myths, and legends in high esteem.