It differs from the shows you are used to. America may be good at hosting thrilling game shows, but the Japanese game shows are simply top-notch and out of this world. They are insane with potentially embarrassing challenges.

From fun adventures to point-blank scary challenges, giving players a run for their money. This country is known for its game shows as it infuses culture and lifestyle.

So let’s get started on the top 10 ridiculous Japanese game shows, in no particular order.

This game is one of the Japanese top ridiculous game shows. It starts as easy but it is no easy feat. You would think that only seven questions stood between the contestants and the prize but, these questions came with a catch.

In that short time, if the contestant gets the question correctly, the mummification stops but begins with the next question. Contestants who lost the game, after being mummified, were put in a stylish tomb. Sounds like one hell of a game. 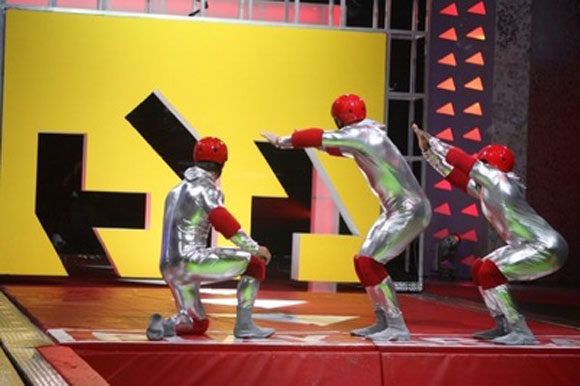 This Japanese game show is not your usual Tetris game where you stack neat blocks that fall from the sky. It is quite different, putting players in humiliating situations that are often hilarious and ridiculous at the same time.

In this show, players are meant to contort their bodies, jump and maneuver through the moving gaps on the wall. Sadly, these gaps are not exactly human-friendly. Contestants who fail dunk into a pool of dirty water.

The shapes are in such a manner that it would be almost impossible for any contestant to twist their bodies, fitting into the shapes successfully. Despite contestants’ futile attempts, the viewers are given gainful doses of hilarity at the many failed attempts.

If you are looking for an intriguing, embarrassing, and humor-driven game, this show is practically a go-to option. In this game, players are put in awkward positions just to eat some dangling marshmallows.

You would think eating dangling marshmallows is probably the easiest game, but it is not. Contestants catch marshmallows in their mouths while their heads are attached to a rubber band.

Imagine struggling with your mouth to catch a marshmallow in such a position. If it isn’t a hilarious sight. The marshmallow rubber band game is a classic in Japanese game shows. 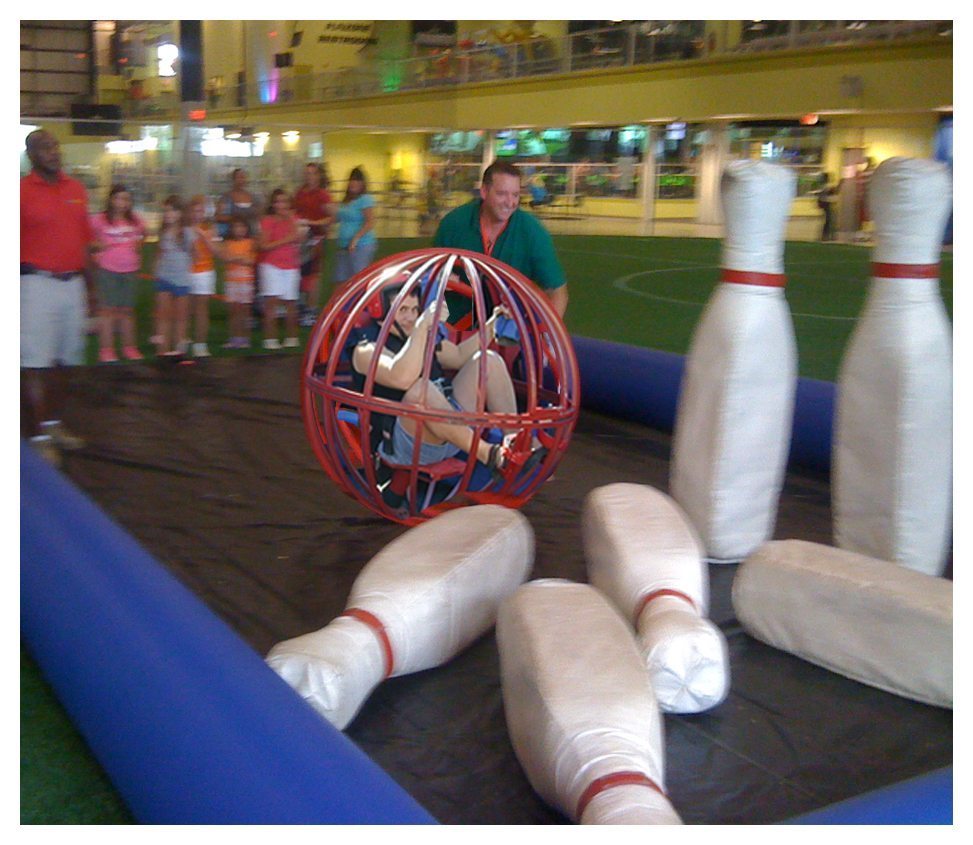 You may already be familiar with the bowling game. In this Japanese game show, instead of a ball to roll down on the pins, humans are rolled down instead. As the game begins, pins are placed like a regular bowling game while contestants are put in inner tubes and rolled nicely down.

Some contestants get lucky, hitting all pins, while the not so lucky ones go head first on the pins, experiencing pain or even getting hurt. Fans usually cheer at how well contestants can fling themselves, hitting all pins. This game show is not only entertaining, but it is also intense.

This is one of Japan’s most hilarious bizarre game shows. As the title implies, it is a game of spreading your legs. The further your legs can go, the higher your chances of winning. In this game, the contestant who is a female strap her legs to a machine that helps spread them apart.

This machine spreads her legs, eventually putting her in a split position. As the game begins, another female controls the wheel, spinning it. As she spins the wheel, the machine slowly spreads the contestant’s legs apart.

If the contestant is in so much pain and cannot endure to the end, she loses the game and the price. To be a winner in this kind of game, you would need to have some wonderful experience with leg splitting and you must be flexible.

Number 6–candy or not candy.

This game show is on the list of ridiculous Japanese game shows. It uses the popular Japanese art form called sokkuri, translated to mean “sweet sculpting”. In this game, contestants bite into random objects to see if it’s actually chocolate.

They often set three options for players to pick from. Some get lucky, biting into delicious chocolate, others get stuck with tough surfaces. If a contestant makes a wrong choice, he or she loses a score.

Imagine biting into a shoe, only to realize it’s not chocolate, but an old shoe. Candy or not candy game shows give the viewers entertaining, hilarious and fun vibes. 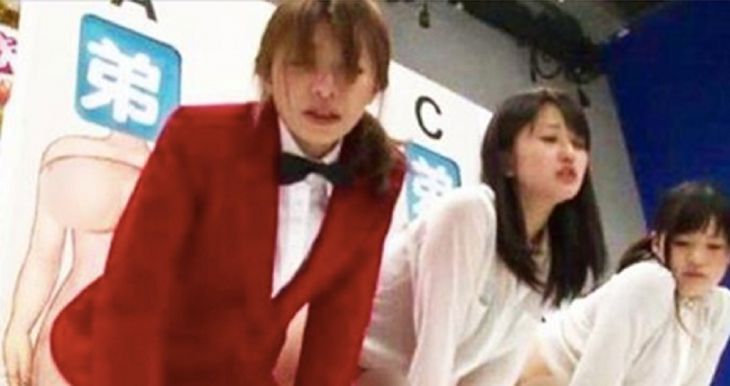 This Japanese game show is a little more like America’s Matchmaker game show. Only there’s a little twist. Instead of actual match-making, contestants are matched to butts. In this game, female models will place their bums through an open port in a wall, while their faces are not revealed to the contestants yet.

On the other side of the wall are contestants who will observe the exposed bum the best way they can, but basically kiss it. Then they progress to guessing which bum belongs to which model. Sounds pretty awkward, doesn’t it? Imagine how awkward it would be for the models.

The bum show combines hilarious, degrading, and inappropriate for a rather appealing glass of iced cocktail. This game is an example of provocative humor in Japanese culture. 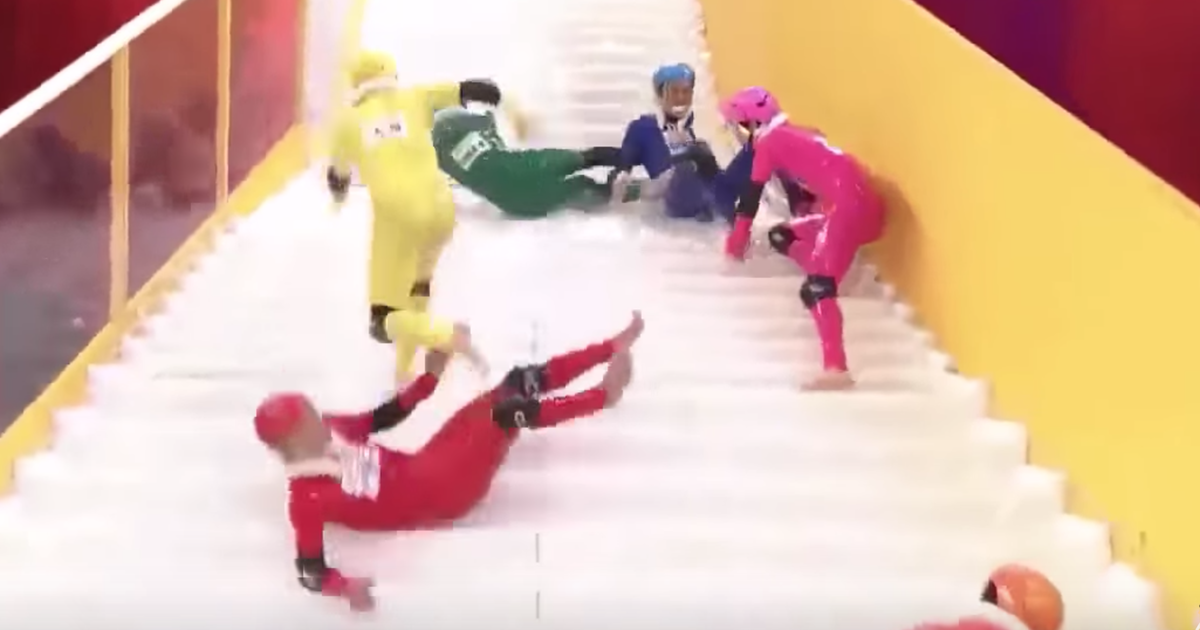 This Japanese game caught global attention when a viral video of people playing a slippery stairs game surfaced in 2017. In this game, six contestants dressed in colorful latex onesies were seen trying to climb the stairs that seemed to be slippery.

With any failed attempt, each contestant was seen rolling or tumbling safely down the staircases. You may wonder why people would even consider playing this game. Well, slippery stairs are played not just for the fun of it.

The catch is that any contestant capable of getting to the final stairs, where the treasure chest awaits, emerges winner, and lays claim to the well-deserved prize. For contestants to emerge, winners would need to apply a great deal of athleticism and stamina.

The show requires a lot of flexibility and displays unending drama. Viewers found the videos not only entertaining but hilarious and oddly soothing.

With Dero Dero, contestants are taken off-guard on a different puzzle journey, answering questions and completing the mental challenge. Which is merely the tip of the iceberg. Unlike regular game shows done in cozy studios, these puzzles are solved rather unusually.

To put the icing on the cake, contestants are made to complete their challenge in a not so cozy circumstance. First, they make their way into a bobby-trapped building, then are caught in a death trap room where the floor retracts, leaving the contestants to find balance on narrow planks.

As the floor retracts into the wall, what looks like a bottomless pit is revealed. That alone can be a major distraction. Well, contestants who aren’t fast enough might find themselves in that pit. The winner of this game stands to gain fame and fortune. This game is scary, intriguing, and bizarre at the same time. 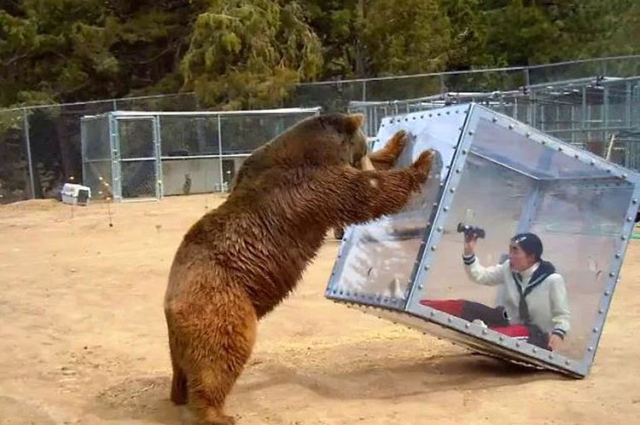 Let’s go to the end of the world game show titled “Sekai No Hatte Madde Itte Q” in Japan has bizarre sides to it. It is definitely insane, if not out of this world. It is like a car race game, only there is no race. Just contestants traveling around the world and doing ridiculous tasks on camera to entertain viewers.

At first, contestants are given the opportunity to travel the world, living their dream. But that is not all there is to this game. What puts the icing on the cake and gives this game a great show is when contestants reach their destination.

Usually, they are presented with horrifying challenges. One of which is exploring wildlife. An instance is a female contestant, placed in a Plexiglas cube and exposed to a whiny bear. Imagine how frightening it would have been for her.

Most of these games are as embarrassing as they come, putting players in the weirdest and most awkward positions there is, to evoke humor from fans. If you want to attempt something daring, scary, bizarre, and adventurous, then Japanese game shows are just the right kind you should try. When it comes to outlandish, jaw-dropping game shows, Japan has no rival. They are practically known for taking up weird challenges