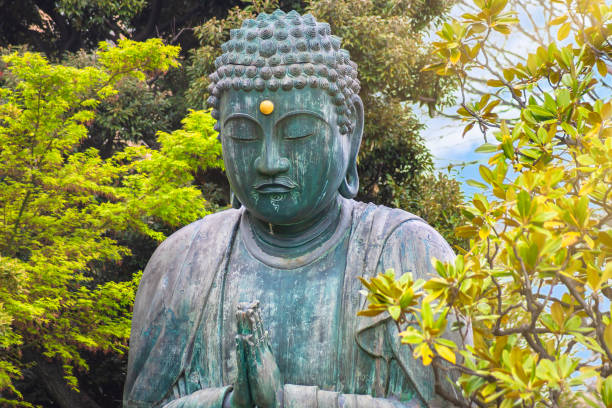 Religion is an essential part of Japanese culture.

Most of the festivals and celebrations in Japan are rooted in their religion. Japanese folks have two main religious affiliations; Buddhism and Shinto.

While many of them take part in the Shinto religion, the rest of the populace takes part in Buddhism and some other minor religions. Shintoists believe in the existence of many gods. They call these gods “Kami.” Japanese gods are worshiped in different shrines scattered all over Japan.

In this post, you’ll learn about the different Japanese gods and a bit about the Shinto tradition.

We can’t talk about Japanese gods without properly talking about the Shinto tradition since it is deeply rooted in the belief that “kami” (gods) are everywhere.

Adherents of the Shinto religion worship most Japanese gods. Shinto is sometimes referred to as Japan’s indigenous religion, and its adherents are called Shintoists.

This religion isn’t set in stone like other religions in the western world. They do not have a founding minor, but they have a particular religious text. Interestingly, Japanese gods are called Kami and are worshiped at Kamidana household shrines, ninja public shrines, and family shrines. Shintoists worship many gods.

As stated earlier, there are several gods in Japan, and they all serve different functions. Sometimes they are personalized by the natives as their gods.

Also, Japanese gods are both male and female and are often referred to as gods and goddesses. They include both major and minor gods. However, the sun goddess Amaterasu is the most notable of all the gods.

She is believed to be the divine ancestor of the first emperor of Japan, a lineage that has remained unbroken to date. So here are some of the different Japanese gods;

Amaterasu is the goddess of the sun. She is believed to have come into being from the left eye of Izanagi. It is said that Amaterasu was created when Izanagi washed the remnants of the underworld from his face after fleeing from his wife, Izanami.

Amaterasu had a younger brother named Susanoo. According to a popular myth, Amaterasu celebrated the first fruits ceremony when her younger brother Susanoo scattered excrement all over the dining table and did other things.

These pranks by her brother so angered Amaterasu that she hid in a celestial cave. Suddenly, the entire world was filled with darkness. The gods were helpless because they needed light. They tried everything to bring her out, to no avail.

READ MORE:  Why is Anime Popular in Japan

One day, they staged a show. When Amaterasu heard their sounds of joy, she was curious to know how they could entertain themselves in the absence of light. Immediately she came out of hiding; they dragged her out of the cave. Amaterasu is believed to be the most powerful deity.

Ame-no-Uzume is a Japanese goddess of the dawn. She is known as the goddess who saved the world from eternal darkness. When the Goddess Amaterasu was angry and hid in the cave, refusing to come out, Amenonzume’s tactics eventually brought her out.

Amenonzume hung a shiny bronze mirror and a polished jade stone on a tree to distract Amaterasu. After that, she flipped over a barrel and started dancing on top of it. As she danced, she flung her clothes off.

The gods were so amused at Nzume’s half nudity that they laughed, causing so much noise and drawing the attention of Amaterasu.

Izanami and Izanagi no Mikoto are known as the parents of all gods. Their heavenly superiors ordered them to stand on a floating bridge between heaven and earth.

They thrust the spear they were given into the remedial gulf between heaven and earth, causing brine to drip. The brine dripping from the tip formed the first island they called Onogoro- Shima, which became the foundation of the world.

After this, they got married, discovered their sexuality, and gave birth to children. Izanami and Izanagi had many children. Some became the eight great islands of the Japanese chain. It is believed that Izanami was burned to death while giving birth to their last child, Kagu- tsuchi( God of fire).

Izanagi was so angry that he killed him. After that, he went to the land of the dead, determined to bring his wife back. When he got there, she didn’t let him see her because of how she looked, but he insisted and looked at her.

Izanami was furious because he didn’t listen to her. Out of anger, she threatened to kill a thousand people every day to avenge her shame. Izanagi took up the challenge and decided that 1,500 people would be born every day.

Benzaiten is the Japanese goddess of luck and wisdom, the god of all that flows from water to time. She is also a Buddhist patron, a deity of arts and femininity. She has a strong affinity with the sea, and she is also the only female among Japan’s “seven gods of fortune.”

She is worshiped as a goddess of wisdom and luck. Most times, she is pictured riding a large sea dragon or playing a biwa, a Japanese flute.

One legend says she could subdue a five-headed dragon that was causing havoc in coastal fishing communities. She could do this because of her beauty. The dragon now rests at Ryukoji in Enoshima.

Ebisu is a smiling god, and he is the god of luck, wealth, and prosperity. He is also a patron of anglers. He is one of Japan’s “seven gods of fortune.” Ebisu is often pictured as a chubby, happy fisherman carrying a fishing rod in one hand and a red snapper in another hand. His name is Japanese Tai.

According to some legends, Ebusi is the first god Izanagi and Izanami gave birth to. Another popular legend says he was the son of the deity, Okuninushi, who is known as the great land master. If you have tried the Japanese beer Yebisu, you will see a picture of Ebisu on this beer.

Raijin is the god of thunder, lightning, and storms, while Fujin is the god of the wind. Raijin is depicted as being red. He has three fingers representing the past, present, and future on each hand. He is always on the left side, carrying a hammer and surrounded by drums.

Fujin is depicted as a green god with four fingers, which represent the cardinal directions. He is always on the side holding a bag of wind. Raijin and Fujin were feared and respected.

It is even believed that they handle the divine wind that helped chase the Mongols away when they invaded Japan in 1281. They are known as protectors. You can find their statuses at the entrance of Shinto shrines and Buddhist temples in Japan.

Jizo is a kami known to be a protector of children and the dead. He is known as a guardian of children, especially children who died before their parents. Jizo is a respected Buddhist figure who is on the path of Buddhism.

READ MORE:  Naruto Vs Ichigo: Who would win in a death battle?

Jizo is very compassionate, and he helps children who cannot cross the sandy river to the afterlife. He hides them in his robes and crosses to save them from an eternity of piling rocks along the riverbank. You can find jizo statues in graveyards adorned with small toys, bonnets, and bibs.

Kannon is the goddess of compassion and mercy. She is the most popular bodhisattva in Japan. She helps women conceive, and she lives in Fudaraku, a mountainous island paradise.

She is depicted in different ways. Sometimes as Senju Kannon or the 1,000 armed Shannon and other times as juchimen Kannon who has 11 faces.

There are many pilgrimages dedicated to Kannon. They include the Sengoku pilgrimage, where practitioners visit 33 Buddhist temples throughout the Kansai area.

In Japan, they sometimes associate Kannon with dragons, and at other times, you can see Shannon riding a dragon.

This is a Japanese god in charge of bringing rice, civilization, and justice to humanity. Ninigi is the grandson of Amaterasu. He was chosen to be an emissary to the people of Japan.

Ninigi is the short form of Ninigi- no- mikoto. He acts as a bridge between the ruling and the divine.

Ninigi died and became immortal, even as a god. Thankfully, this did not take away from his divinity. There is a burial mound associated with Ninigi, at E no Goriyo in Hyuga.

Inari is one of the most popular Japanese deities. He is a Shinto deity in charge of rice, tea, sake, foxes, smithing, and prosperity. This kami is depicted as a bearded man riding a white fox.

At other times, he is depicted as a long-haired woman carrying rice. Inari has many faces. Interestingly, you can easily recognize an Inari shrine because of the signature fox statues on the premises. These foxes are Inari’s messengers.

There are many Japanese gods, and they have faithful followers. It’s interesting to know that these gods serve different purposes. They are of great importance to Japanese Legends, myths, and folklore. Most of these gods have shrines where people go to worship them, while they worship some of them at home. These gods are also depicted in Japanese pop cultures, such as anime and manga.