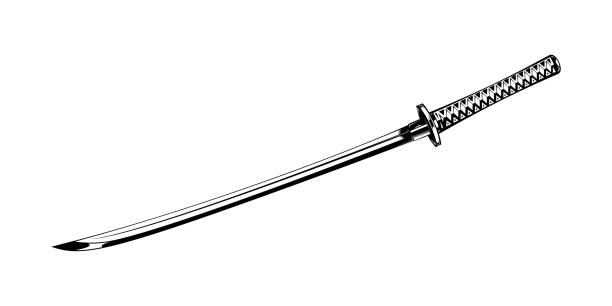 Japanese culture features a lot of weapons known in today’s society all over the world.

In this article, you get to know about different Japanese swords used years ago.

These swords are intimidating, and they possess prominent features that make them worth the hype. Most of the blades are similar, ranging from thin blades, curvy blades, sturdy handles, size, length, and so on.

They also have what makes them different and identifiable. 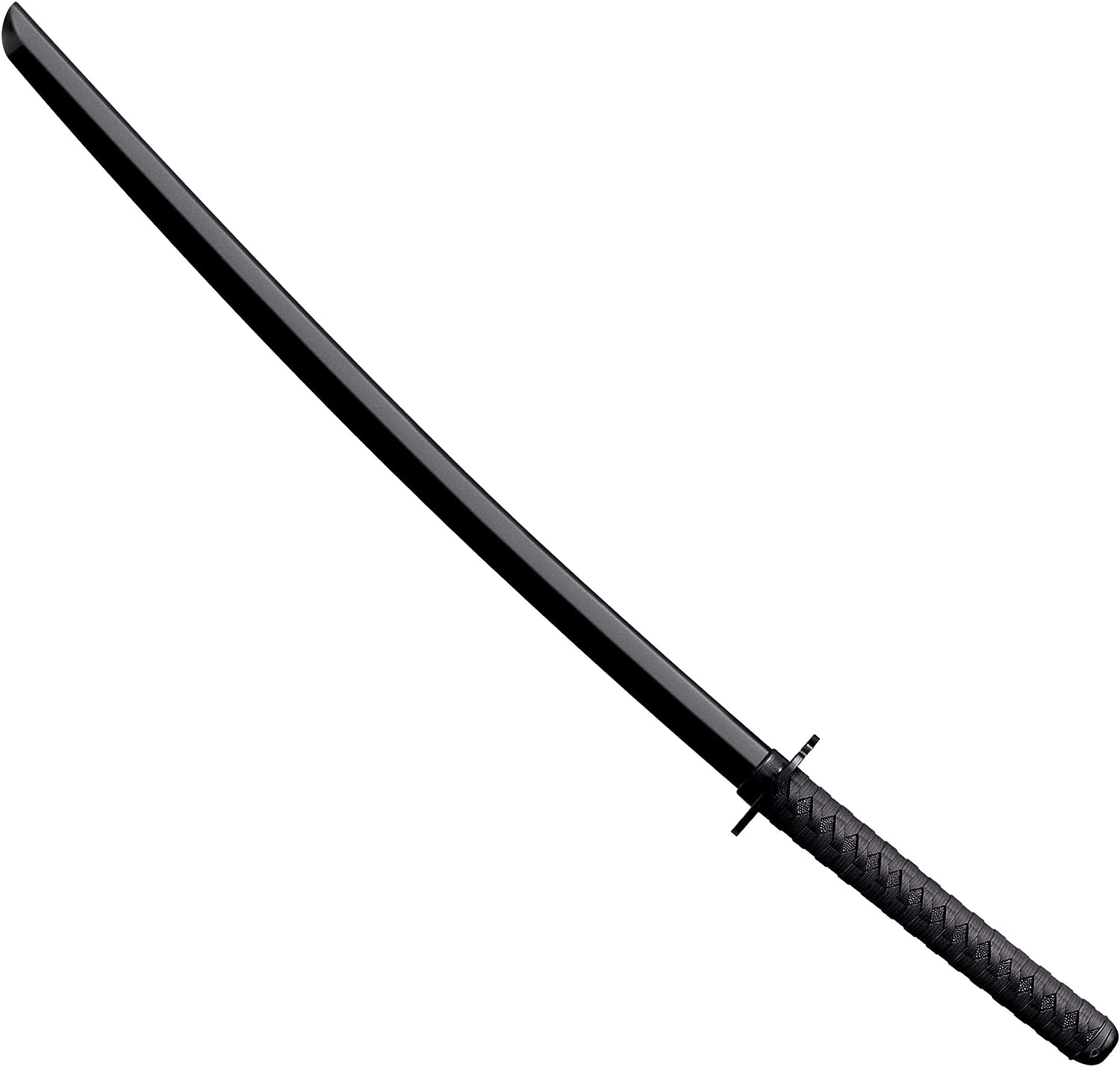 The Bokken sword is one of the most common Japanese swords and it is known for so many things. If you’re familiar with Japanese content and history, you are likely to have come across these bokken swords either in movies, videos or articles.

The Bokken sword is a long wooden sword that warriors use for practice and training. In shape, the Bokken swords are like the Katana and Wakizashi at the same time. It seems to carry the characteristics of two different swords.

The sword is a lethal weapon when used in the right or wrong hand. However, the sword was created to leave as few casualties as possible during training.

The origin of the sword can be traced back to 1612, in the legend of Miyamoto Musashi, who was a famous soldier of the Edo period, allegedly paddled to an island for a duel. On the way there, he created the bokken sword out of one paddler used to get there.

Upon arrival, he uses the newly created weapon against his enemies and it deals a fatal blow to them. 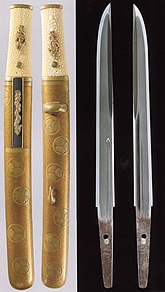 When mentioning the different swords in Japan, Tanto cannot be left out. It is a unique weapon used by old Japanese warriors to cause significant damage to their adversaries.

The tanto sword differs from a long sword, it looks more like a bigger dagger.

The sword may be smaller, but extremely sharp and can cut through many things. It is used for stabbing during battle or on other occasions. During battle, it may not be a major weapon. It’s more of a secondary weapon for emergency use during battle.

The tanto sword can either be a single or double-edged blade. Most warriors decide to make both sides sharp or not. The sword is unusually straight and not over 12 inches. Most warriors use it to accompany the katana sword as a secondary weapon.

The sword is often regarded as one of the most respected samurai weapons used in history. It may not be a primary weapon, but it can do a lot of damage during battle. Throwing it alone can take out a lot of enemies during battle. 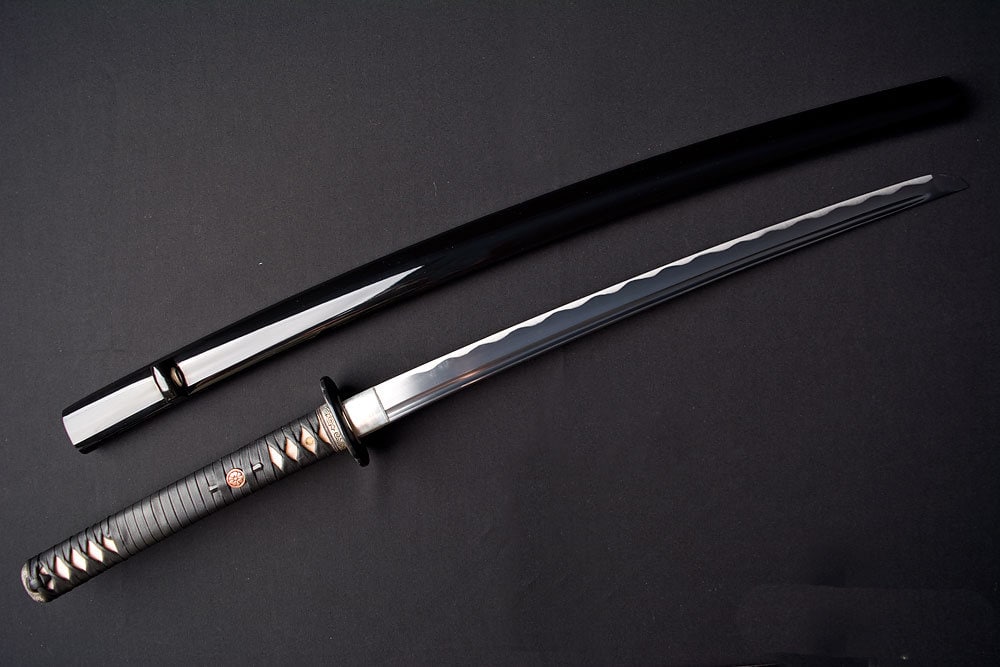 When classifying the greatest Japanese weapons, The Shinobigatana sword cannot be left out. It is one of the most prominent Japanese swords in history.

For those familiar with the Japanese ninja culture, this sword would be a highly recognizable weapon. This sword has other names that it is called.

It is also known as Ninjaken, Ninjago, or the ninja sword. The Ninjas of Japanese culture mostly used the sword. The sword is lightweight, which makes it easy to wield.

The major feature of this sword that distinguishes it from others is that it has a long blade that is very straight and sleek with a square guard.

The weapon is intimidating when seen in battle. It can do damage against enemies. The sword is also very durable and sharp. It can cut through rough surfaces and skin. The weapon is very common in the Edo period and Ninjas mostly used it to dispatch opponents. It is believed to be the best Ninja weapon of the Edo period. 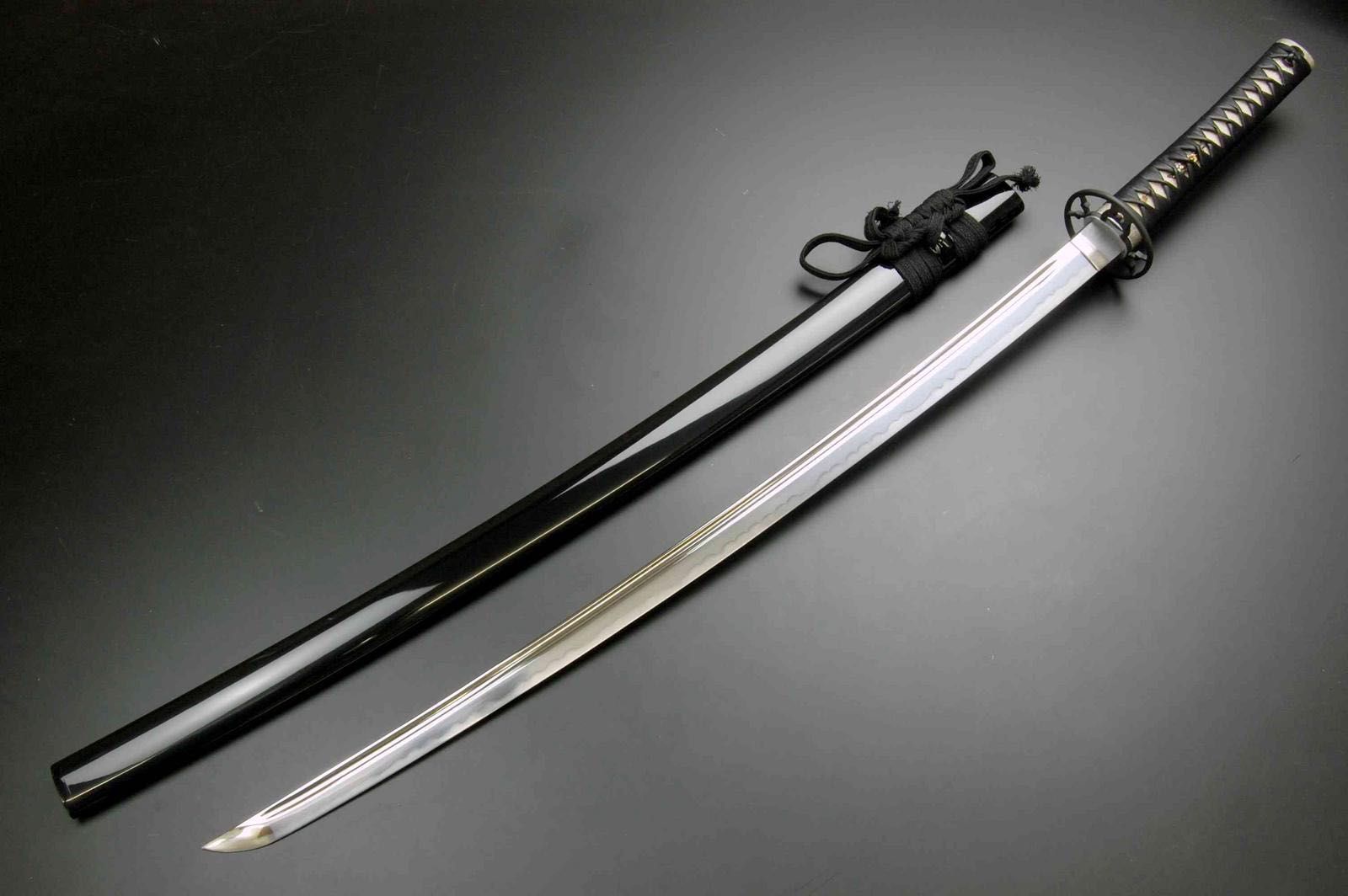 The uchigatana sword is a descendant of another great Japanese weapon – the tachi. It is not commonly known like other Japanese swords. Since it is the descendant of tachi, most people call them the same, whereas they are different.

The sword was first used in the 15th century for the sole reason of handling lighter weapons. Most of the Japanese samurais then wanted a light weapon to wield on horsebacks and land. There are key similarities and differences between the sword and the tachi sword.

The uchigatana blade is shorter than the tachi by  10cm or thereabout. This makes it lighter and easier to handle.

Compared to the tachi sword, the uchigatana blade is worn around the samurai belt with the edge facing up.

The curvature of the tachi blade is towards the hilt, whereas the curvature of the uchigatana blade is near the tip, making it the weapon of choice for warriors wanting to combine drawing and striking in one action. This difference makes the sword another option for the warriors when they need something lighter.

When highlighting the best swords of the Japanese, the Nodachi cannot be removed from the top swords. It is very long and can decimate enemies in battle.

If you’ve seen a Japanese movie or video where a Samurai is wielding a very long weapon, almost his height, one can conclude that the weapon is the Nodachi sword. It may have a thin blade, but it is extremely sharp, and one of the biggest types of Japanese weapons ever created.

The Nodachi swords are over 150cm. It has a unique use in battle, based on its length and special characteristics.

It is used as the perfect counter weapon for mounted enemies. In most cases, two hands are used to maximize their power.

Two hands handle it better and it is possible to add more force on each strike. The look of the sword is very similar to the tachi sword. Their size points out their difference. Seeing this weapon alone ignites fear in the minds of the enemy.

If you’ve been following up, you will discover that some of the Japanese swords are identical to the tachi. If you did, then you’ve done well.

The fundamental explanation behind this is because the tachi sword was used as a source and inspiration to create other sword designs.

The Kodachi sword is part of these swords and this is where they draw their similarities. Apart from being similar in design, they are also similar in shape. However, they are different in size. The Kodachi is shorter and smaller. Due to the size, it creates a similarity with a wakizashi sword and people frequently mistake them.

They are very different swords. Their discrepancy lies in their function. The Kodachi has a fixed length of 60cm. The Wakizashi on the other hand doesn’t have a fixed length. It is used to accompany the katana and this determines the length. The kodachi sword has exceptional use. It is used by merchants and travelers as a self-defense tool rather than by warriors in serious battles. You might have come across the sword in movies or other shows about Japanese culture. Anywhere you see samurai warriors equipped with two swords at one time. The swords are likely to be a katana sword and a wakizashi sword. The sword shares noticeable similarities with a Kodachi and the Katana at the same time.

In style, it is very similar to the Katana sword which is usually with a curved blade. The significant difference is that it is shorter by up to 20cm. When a warrior wears both swords, their purpose in battle differs. The wakizashi is the backup weapon. This is seen in the meaning of its name. It translates to  ‘side insertion’ in Japanese.

The sword is shorter and smaller in size and most samurai warriors keep the weapon underneath their pillow for emergency use. In fights, the wakizashi is used to fight in confined spaces. It acts as the perfect backup weapon to finish off enemies during battle. This weapon cannot be left out of the best Japanese swords ever created. 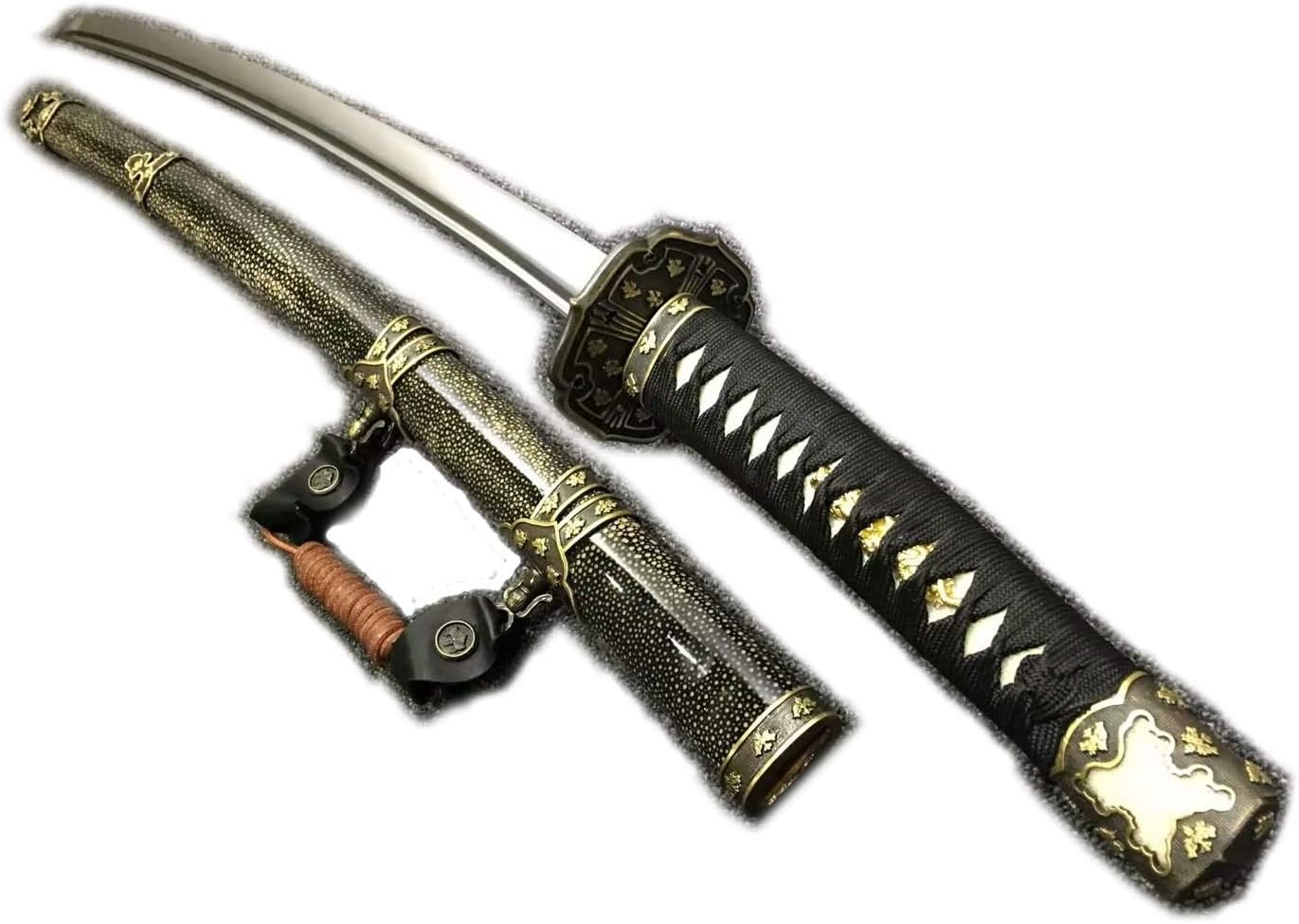 Since the beginning of the article, you must have noticed that most of these weapons have plenty of similarities but their names and other elements show their differences. There is no doubt that the tachi sword is as good as the Katana.

On several occasions, the Tachi sword is referred to as the predecessor of the katana, for obvious reasons. The sword is one of the oldest swords of the Japanese. It existed before the Katana and was the sword of choice for Japanese warriors. The dominant difference between the two weapons is that it has a more pronounced curve and a longer blade.

Most warriors who fought from horseback desired the Tachi sword because of its Length Which makes it easy to reach enemies and slaughter them.

In comparison to the Katana, the tachi features a downward-facing edge and this is one of the most significant differences that makes it possible to distinguish between the two mighty weapons. The sword is durable and has very sharp blades that cut through very deeply at a single strike. Most warriors handle it with both hands to do greater damage. 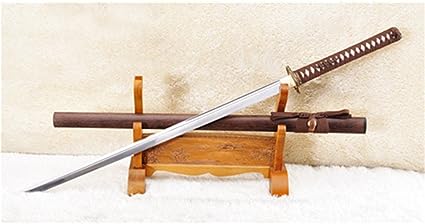 It doesn’t comprise complex looks or designs. It is a one edge straight blade. Unlike other swords that have curves, the Chokuto sword is a straight blade with a simple handle. The chokuto sword is one of the earliest Japanese swords to have been recorded in existence.

According to history, the sword is said to have originated from China and was later imported to Japan around the 10th century.

The sword has a common way with which it is worn. Warriors usually wear it hanging around the waist for access. When compared to the katana and the tachi, the chokuto looks more like a basic and simple weapon. This is noticed in the blade curves in each sword. The weapon is known for its unique size and length. It is not too long nor is it too short. It fits into the arsenal of many warriors perfectly.

READ MORE: 10 Things That May SHOCK Tourists When They Visit Japan.

The Japanese Katana is a single-edged blade with a curve and is held with both hands, it is flexible to use and is quite strong. The Katana emanated from Japan, it was used especially by Samurais and it is known to be a very powerful weapon that can create lots of destruction on only a single strike.

In making the Katana, most blacksmiths will repeatedly heat and form the steel over and over again to make it strong and sharp enough to use. Well, it is flexible, strong, and sharp! The Katana is one of the most iconic weapons to date. Looking at this weapon you’ll know it is beyond powerful which makes it one of the best in the country’s history.

The weapon shares similarities with other prominent Japanese weapons. However, it is known to be the most preferred sword that the Japanese Samurais used in battle and they accompanied it with smaller swords like Wakizashi and the tanto sword. Throughout the history of the country, it will always be referred to as one of the greatest swords ever created.

Japanese culture and history are known to feature numerous wars by the Samurais. Most of the Japanese swords which have been listed above were top weapons used by the best warriors. Most of the weapons can do great damage when used in battle. They all have unique and common looks.