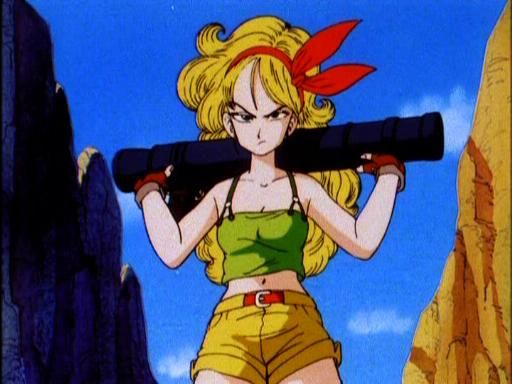 There’s always this curiosity when your favorite character does the disappearing act with no trace.

For many Dragon ball fans, this seems to be their fate with Launch. Though Launch is not the central character, she was one of the main characters in the early dragon ball series. But as the series went on, she was nowhere to be found.

Dragon Ball is one of the popular anime series that has remained in the hearts of several anime lovers.

Dragon Ball tells the story of the son Goku, who was training to become a martial artist. He met with Bulma, who encouraged him to go on a quest in search of dragon balls. In his journey, he met with many characters, one of which was Launch.

If you are already familiar with dragon ball, Launch is a character that you can’t help but notice. Her unique split personality, which switches when she sneezes, makes her even more alluring. Launch is part of the dragon ball team.

She joined them after being almost caught by the police for her crime. She is a young woman with multiple personality disorder. Her first personality is sweet, innocent, and charming. She has blue hair, and she is kind, cute, playful, and helpful to others.

She becomes a blonde woman with a short temper. When she’s in this state, she commits lots of crimes and can kill anyone with her gun. She also commits crimes for money. One interesting thing about Launch’s personalities is that neither of them has a memory of the other, nor do they know they exist.

READ MORE:  10 Anime Movies Like Spirited Away that captured my heart

When they rescued Launch, they took her to Master Roshi’s island. And since then, Launch became part of the Dragon Ball gang and is a fan favorite of many anime enthusiasts.

Since Launch has distinct personalities, her looks differ. She might look innocent one second, and then the next. She’s a Blondie with a very short temper that shoots her gun at the slightest provocation. This change in appearance happens anytime she sneezes. So we’ll show you what Launch looks like at different times.

When Launch is her innocent, charming self (her first personality), she is often seen wearing a green crop tank top with yellow shorts and a red belt. She also wears green socks, a red pair of shoes, and fingerless gloves.

When she is in her first personality, her hair is always blue, and she adorns it with a red ribbon. She also has big blue eyes that match her hair and make her look cute. In this personality, Launch helps Master Roshi during his training.

Master Roshi is a pervert, so he always tries to touch her inappropriately. Unfortunately, he is never successful because Launch gets her nose tickled, causing her to sneeze. Then she changes into her criminal personality, which is short-tempered and does not hesitate to attack anyone.

This is Launch’s second personality. Her hair becomes blonde when she is in this state, and her tank top changes from green to pink. Her other outfits change to black pants, white knee pads, and red gloves.

Also, her eyes become smaller than before. She carries her gun with her, which she uses to attack anyone, including Goku, Krillin, and Master Roshi.

They are always scared of her when she switches to this personality because she shoots at them without hesitation. Despite the changes, Launch always has her red ribbon and her machine gun with her.

When was Launch introduced in Dragon Ball?

Launch’s character is introduced in the series when young Goku and Krillin are sent on a mission to find a girlfriend for their Master Roshi. Launch is seen running away from the police after she robbed a train.

She sneezes and changes to her innocent personality, oblivious to what is happening and why she is being chased. Goku and Krillin, who thought the police were impostors, fight to save Launch. While Goku fights, Krillin is seen hiding.

After they save Launch, they then take her to Roshi’s island, and, from that point onward, she becomes part of the Dragon Ball gang. Launch stays with them and offers to help in the kitchen, cooking, and cleaning to hide away from the authorities.

She cooked, and clean after attacking Goku, Krillin, and Master Roshi several times during training. Though she was not so integral to the plot, Launch was an ever-present supporting character for most of the Dragon Ball series. Her split personalities were often a superb source of comic relief.

What really happened to Launch?

It is not out of place for characters to disappear and reappear in such a long-running series as Dragon ball. But since Launch was a fan favorite, her disappearance raised questions. In Dragon Ball Z, Launch continued to appear, but in a less prominent capacity.

She is seen doting over Tien, the triple-eyed Z warrior on who she has a crush. After Tien Shinhan is killed in a battle against the Saiyans, Launch is also seen at a bar drinking and grieving Tien. After that, she was never seen again.

While many assumed she left because of her love interest, others were still curious to know what happened to her. Sadly, her disappearance was nothing but an omission from Dragon Ball’s creator Akira Toriyama who accidentally forgot about her character while creating the series.

During a 2013 interview with Mando Kobayashi, when Akira Toriyama was questioned about Launch’s absence from the series, the dragon ball creator admitted that he totally forgot her character at some point.

And when he remembered, he had to find a reason for her disappearance. Therefore, Launch was assumed to have run away after Tien Shinhan; her love interest died. He also mentioned that when he remembered her character, the Super Saiyan transformation was introduced, and the blonde head super up was too similar to Launch’s personality that he couldn’t reintroduce her.

Regardless of her disappearance, Launch’s impact and influence on the series are still felt today. She still appears in Dragon Ball Z but in less capacity than before. After Tien’s death, Launch is mostly seen during flashbacks.

She also appears in an anime-only scene where she offers her energy to Goku’s spirit bomb so he can defeat Buu in Dragon Ball Z’s final saga. Apart from this, Launch also appeared in Yo! Goku and his friends return special.

To fans’ surprise, she disappears again in Dragon Ball Super and other modern series releases. Launch has a very unpredictable character. Even her appearance and disappearance in the series are unpredictable and inconsistent.

Is Launch a Saiyan?

Due to Launch’s split personalities, fans often wonder if she’s a Saiyan.

Saiyan in Dragon Ball are aliens who are strong and extremely skilled in combat.

Launch’s character has been mistaken for these beings because of her switch, which fans often attribute to be a Super Saiyan transformation. However, Launch is not a Saiyan. She’s just a normal human being with multiple personality disorder.

Some still argue that since her personality changes hair color and she sometimes doesn’t even recognize the gun she carries, maybe she is a hybrid Saiyan and not a full-blooded one, seeing that her personality is like theirs.

All these are theories and speculations as to the character. However, Akira Toriyama is yet to confirm or refute these speculations.

Though Launch’s character isn’t the most significant, her appearance and disappearance in the series have definitely got fans talking.

Her unique personalities alone are enough to make you drawn to her character when you watch the series.

In fact, you end up laughing as she sneezes and changes into two entirely different people. In Dragon Ball Z, Launch was mostly in her criminal personality. She falls in love with Tien, and after he dies, she is seen grieving at a bar. If you’re an anime enthusiast, check out other articles like Gohan vs. Goku: Who will win in a fight?