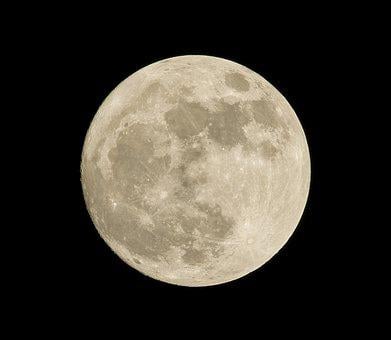 In different cultures around the world, including Japanese culture, the moon holds great significance.

It is the earth’s only permanent natural satellite. If you are a lover of anime, you will see different instances where the moon was revered in some anime series.

If you’re wondering how to say “moon” in Japanese, you are in luck. This post will show you the different ways to say moon in Japanese.

Significance of the Moon in Japanese culture.

The Japanese have different religions; Buddhism, Hinduism, Christianity, etc. Buddhism is one of their major religions, and in Zen Buddhism, the moon signifies enlightenment. However, despite their diversity in religion, the Japanese people as a society see the moon as a positive force.

They love the moon, and they celebrate the new moon. To show how significant the moon is to the Japanese people, they hold a festival called Tsukimi in celebration of the moon.

The Tsukimi ceremony is done in honor of the autumn moon. Interestingly, how Japanese folks say “moon” depends on the different phases of life. That means depending on what phase of life the individual is, the name they call the moon changes.

This festival is also called the moon-viewing festival. It is a Chinese tradition imported into Japan during the Nara (710 – 784) and the Heian era (794 -1185). It is usually held at the beginning of autumn.

The Japanese word Tsukimi means “to look at the moon” or “moon viewing”. The festival is celebrated between the end of September and the beginning of October. Though the date isn’t static and varies from year to year, it always occurs around the autumn season.

This festival results from an old legend that says when you observe the full moon at night, you will see two rabbits kneading mochi (a Japanese rice meal) and a mallet.

On the day of the festival, they sit in open places like parks or gardens from where they can clearly see the moon. Shrines, temples, and traditional gardens or parks also organize various activities to commemorate this festival. During the festival, the Japanese people also knead mochi as the rabbit in the moon does.

link to How to say please in Japanese

Tsuki is the main, and most commonly used word to say moon in Japanese.

Tsuki, spelled in Japanese kanji, is written as a photograph of a crescent moon hidden behind the clouds. It is the most common way to say “moon.” So if you are in Japan and want to talk about the moon, this is the word to use.

Using ‘Tsuki” in a Sentence.

Luna is another way of saying moon in Japanese.

This word has many meanings: flower, purity, lovely, and then the moon.

So whenever you are in Japan or your Japanese friends say the word Luna, they are referring to many things, amongst which can be the moon too.

Mika Zuki is another way of saying moon in the Japanese language; when translated, it means “moon of the third night.”

Jougen no tuki is yet another way the Japanese say moon.

There is a Japanese song titled Jogen no tuki. There are other ways of saying moon in Japanese, like ; Shigetu Mika, hutuka Zika, Komochi Zuki, Jusanya Tuki.

The moon is used to tell time.

We have established that the word moon differs when used in different situations. Apart from that, it can also be used in compound words to give different meanings. Let’s look at some of the most common and useful ones.

The most common Japanese word for moon, “Tsuki,” can change to become “getsu” when used as a day of the week. For instance, the phrase “getsuyoubi,” which translates to Monday, has its meaning in relation to the moon (moon’s day, day of the moon.)

To identify the time of the year, the word for moon also changes to “gatsu.” For instance, Ichi gatsu means “one month.”

link to How to say snake in Japanese

Japanese people have a very rich culture, and their language is not left out.

The Tsukimi festival, although based on a legend, is celebrated every year with so much pomp and beauty.

The common way to say moon in Japanese is Tsuki. However, there are other ways to say the word, and thankfully we’ve listed them out for you. So whenever you are in Japan, and you hear any of these words, you can tell that they are referring to the moon.