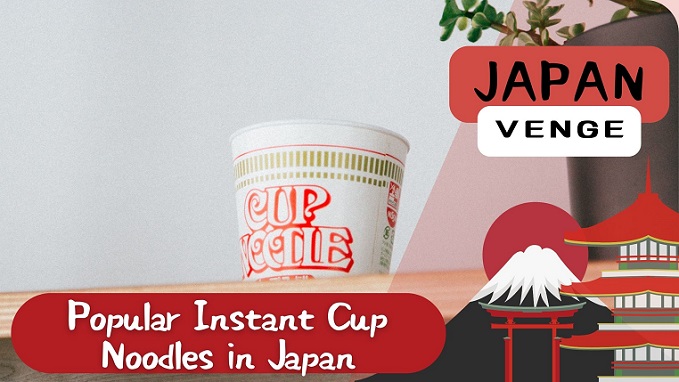 If you do not have the time to cook, instant noodles are the best way to fill in your stomach. Aside from it being easy to cook in no time, it is also convenient to bring anywhere.

Nissin’s “Cup Noodle” is the world’s first cup noodle. Since its launch in 1971, it has been a long-selling product loved by many people around the world. Its appeal lies in its wide variety of types and size development to suit your needs.

In this article, l will determine the popularity ranking of such different cup noodles from Nissin which is also popular in Japan!

Other than the regular cup noodle flavors, there are also limited-time cup noodles that you shouldn’t miss trying in Japan. Scroll down to this post and check out the top 15 Instant Cup Noodles in Japan to try!

Television Coverage of the Incident prompted Cup Noodles to become a hit. The world’s first cup noodles “Cup Noodle” was released by Nissin Foods. In 1966, Nissin’s president, Momofuku Ando, ​​got a hint from an American buyer who had broken chicken ramen into two pieces and poured boiling water into a paper cup.

Started development of “Cup Noodles”. After overcoming a number of difficulties, it was commercialized in 1971, but because it was more than three times the price of Fukuromen at the time, it did not take off. However, with absolute confidence, Nissin continued to operate on its own, and in 1972, the company was flooded with inquiries about its independently developed cup noodle vending machine.

It is said that about 20,000 units have been installed in the Tokyo area alone. In addition, it is said that the image of riot police eating Cup Noodles became a hot topic in the television broadcast of the Showa era incident “Asama Sanso Incident”, and it has grown into a national hit product.

Secret Hidden in the Package

Cup Noodle had become a significant product after a year of its launch. If you look at the katakana characters for “Cup Noodles”, you’ll notice that only the letter “do” is written small.

The reason for this is that they were careful not to be mistaken for “nude” and that they wanted to make the image closer to the English pronunciation of “noodle”.

Commonly described as a cloudy soup with seafood flavor and richness. The Nissin Seafood cup noodles are the most famous among all the flavors available in the market.

Known as Nissin’s cup noodles which has a mild and thick curry soup.

This noodle has a mild and thick curry soup with sweet vegetables on chewy noodles. Ingredients are potatoes, diced pork, minced pork, carrots, and green onions.

The spiciness of chili & the mildness of tomato soup. If you love spicy foods, I would recommend you to try this Nissin cup noodles flavor!

A soup that matches the spiciness of chili with the sweetness and sourness of tomatoes. Ingredients include tomato cubes, corn, cabbage, green beans, and “white mystery meat” derived from chicken.

Deliver delicious food from around the world! Tom Yum Goong is Thai cuisine and Nissin considered making such flavors for those people who want to taste some Thai foods. Although this is not an authentic one, it represents the flavor well that will make you feel like you’re eating the real one.

Reproduce the dishes that are popular around the world with “Cup Noodles”. Tom Yum Goong is very popular in Japan with its unique “sour and spicy” taste.

Who would forget the world’s first cup noodles flavor, right? Nissin’s original cup noodles are still lingering around the world with improved taste.

Excellent compatibility highlights a European-style curry and special cheese powder in one bowl.

The European-style curry soup, which features beef and tomato flavors, comes with a special cheese powder blended with 3 types of cheese. The flavorful, sweet, and rich cheese powder enhances the umami of the soup.

If you’re searching for more western-style salt flavor with smoked olives noodles, you must give these Nissin Sio cup noodles a try!

The soup has the flavor of chicken, the scent of herbs, and a Western-style salty flavor with black pepper. The ingredients are seasoned minced chicken, cabbage, french fries, seasoned eggs, and red bell peppers. Comes with smoked olive-style oil.

The Nissin Miso cup noodles offer a full-bodied flavor that has 3 types of miso with a rich finish!

It features a rich soup that combines three kinds of miso and accents ginger and garlic. The new ingredient “Sansho Mysterious Meat” gives a refreshing aftertaste.

Featuring the Hokkaido and rich milk in one bowl, Nissin has introduced such savory and creamy noodles for everyone to enjoy!

It features a rich creamy soup with sweetness and richness, which is made by adding “Hokkaido-produced” milk powder to a seafood soup with the flavor of seafood and pork bones.

Soy sauce and bonito soup stock with chicken instead of duck. Nissin has made a little twist with its Nanban Soba cup noodles because of using chicken.

Chicken Nanban soba with the flavor of soy sauce and bonito that tastes like you’re eating at a restaurant.

Properly delicious, but with 30% less salt! Knowing how salty such noodles are, I know some of you might be looking for salt-less cup noodles to take care of your health. Thankfully, Nissin introduced the Salt Off cup noodles just for you!

Even though it’s delicious, the salt content is 30% less than a regular serving of cup noodles. Ingredients are seasoned minced pork, minced pork, shrimp, scrambled eggs, and green onions.

It is characterized by a rich and punchy flavor that adds the flavor of fat and garlic to the pork bone soup with the flavor of pork.

Clam Chowder is known to deliver delicious food from the United States.

Boston’s famous dish Clam Chowder has appeared in the “Cup Noodles of the World” series, which reproduces dishes popular around the world in “Cup Noodles”. It features a rich and creamy soup that brings out the flavor of seafood.

Cup Noodle Super Combination 2nd series. This unique pairing of Nissin cup noodles should also be on your list to try!

Nissin also introduced the beef and bonito/udon soup stock in one bowl. Nikudashi udon with a slightly sweet sauce that brings out the flavors of beef and bonito!

What are the Best Cup Noodles in Japan

Since noodles have been a staple food for most Japanese, cup noodles are really a time-saver, especially for busy people who don’t have a lot of time to cook. Nissin has proven its dedication to helping people save time by launching its cup noodles.

There are a lot of cup noodles flavors for you to try and with such a number, I know you can’t get to try them all at once. I hope this article helps you find the best cup noodle flavor to try that will surely please your taste preference!

Please let us know your favorite cup noodles as well.