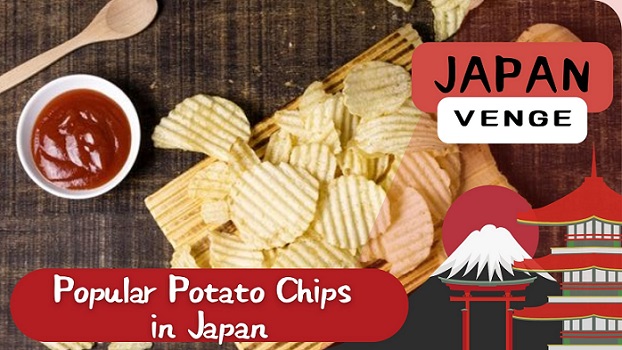 Potato chips are a popular snack that you can’t help but reach for even if you’re worried about calories.

A wide variety of arranged recipes that match the dishes are also available online and continue to grab the stomachs of a wide range of generations.

If you’re looking for the best Potato Chips in Japan, scroll down to this post as I will introduce to you the best potato chips to try when you’re in Japan.

What is Potato Chips?

Popular for their Crispy Texture, Potato Chips are famous as a snack with a crunchy texture. “Usushio”, “Norishio”, and “Consommé” are some of the classic flavors. Another point is that each product has an exquisite texture, such as the hard-textured “Kataage Potato” and the jagged thick-sliced ​​“Pizza Potato”.

The royal road of royal roads, is definitely delicious! It is no exaggeration to say that potato chips are the first product that comes to mind for everyone. It’s so delicious that you’ll want to eat it anytime, anywhere.

Larger sizes are also on sale, and I appreciate the fact that the price is reasonable. I don’t think there is a potato chip that can beat this after all these years. There are many other delicious flavors, but the thinness, saltiness, and potato flavor are all well-balanced.

After all, potato chips are the classic light taste. Sometimes I want to eat it and buy it.

I eat as much as I want to have a light taste and one more. I like royal road the most. It’s good that it’s cheap and delicious!

I don’t know if it’s unique to Kansai, but the Calbee Norishio potato chips are the best! No frills. There are several types of Nori Shio that are always at home. It is the royal road of the Kansai people who never gets bored. Chocolate is eaten alternately in combination. Eat Nori and eat chocolate. This combination is the best!

I love potato chips and have eaten a lot of them until now, but I think the one I eat the most in my life is Norishio! It goes well with cola, sweet juice, tea, and beer!It has a slightly spicy taste, and when I checked it out, I was surprised to find that it also contained chili peppers!

It also has a moderate salt punch and the flavor of green laver is irresistible! By adding aonori to potato chips, the texture becomes light and you can eat as many as you want.

I think the combination of green laver and potatoes is very good. Also, by adding just the right amount of salt, the flavor of the seaweed is further enhanced. If you have 1 bag, you will be able to eat it in no time!

The Calbee Pizza Potato Chips are undeniably delicious! It is no exaggeration to say that potato chips are the first product that comes to mind for everyone.

It’s the royal road of the royal roads, and it’s so delicious that you’ll want to eat it anytime, anywhere. Larger sizes are also on sale, and I appreciate the fact that the price is reasonable.

I don’t think there is a potato chip that can beat this after all these years. There are many other delicious flavors, but the thinness, saltiness, and potato flavor are all well-balanced.

The Calbee Potato Ships Consomme punch is actually made from the soup.

The meat and vegetables are slowly simmered to make a soup, then let it rest for a long time, then it becomes a powder full of umami. In addition, the secret powder is added and it is finally completed. That’s why the depth of taste is different!

The secret ingredient is “plum,” which has been secretly included since the product was first released. Thanks to these plums, the flavor is sharp and the aftertaste is refreshing (the back side of the ingredients says “plum meat powder”, so please take a look next time).

Even after more than 40 years, the punchy taste is still alive and well! It tastes like consomme, and you’ll love it! It has more punch than the taste of salt, and it’s so delicious that if you don’t save it properly, you’ll eat the whole bag.

If I can get this chip powder, I would like to use it for various dishes.

Calbee Kataage Potato Lighty Salted Flavor has a firmness that is just right for potato chips.

Just like the catchphrase, the more you chew, the more delicious it is. It’s not too hard and has just the right amount of texture. The satisfaction after eating is many times more satisfying than other potato chips. It’s delicious, and the price is reasonable.

You can enjoy the taste of the ingredients more and the texture is irresistible. It’s made by slicing thick potatoes and deep-frying them. It’s really irresistible. When you chew it further, not only the potato flavor but also the taste is richer! The taste and texture are irresistible!

If you love snacks like me, Calbee’s potato chips “honey butter flavor” is by far the most delicious among the classics. The point of its deliciousness is sweet and salty and has a perfect balance of sweet and salty, and you will never get tired of eating it.

As the name of Happiness Butter suggests, these potato chips have a slight butter flavor that makes you happy. Image of soy sauce contract rather than the salt system. It has a sweet taste, and as a drink, it goes well with ginger ale rather than cola. Since it is not stiff, it is difficult to feel a heavy stomach.

The combination of honey and butter is just naturally perfect. When it comes to honey and butter, it’s a Western confectionery combination. At first glance, it looks very sweet, but when you eat it, it’s salty and not overpowering, and you’ll finish it in no time.

The founder, Mr. Koike, went through trial and error to find out what kind of flavor to use since the salty flavor is the mainstream. It’s wonderful to try sprinkling whatever you have at home and make the best match for the nori!

Even now, the flavor of Koikeya’s No. 1 popularity is deeply rooted in the identity of the Japanese people. It is tagged as classic but still offers a delicious taste.

There are no more delicious potato chips than the most famous Pringles in flavor Sour Cream & Onion.

Of all the flavors of potato chips, I bet you’ll never have a potato chip as good as Pringles’ sour cream onion, and it’s arguably the best potato chip out there.

Among the potato chips with many Japanese-style seasonings, it is the strongest potato chip that matches the sweetness of the onion with the refreshing sour cream.

Sour cream-based potato chips are now being made by various manufacturers, but this was the first one that shocked me and is still number one. It’s easy to carry around, so it’s the strongest item for snacks when you go out.

The chili-flavored powder and garlic flavor sprinkled on the potato chips are also addictive. It’s not as spicy as it looks, and it’s just the perfect amount that anyone can eat. Among spicy potato chips.

Once you start eating, you can’t stop! There is a peculiar smell of Karamucho and it has stick-shaped Karamucho that you can taste. These potato chips are extremely hot and you’ll also realize your saliva flowing from your mouth when you start eating these chips.

I think its the Karamucho that makes you want to eat regularly for some reason. The exquisite spiciness that lingers in your mouth becomes a habit. Old-fashioned packaging is also good. It’s a staple in me to eat with Calpis soda.

If you’re searching for finger snacks that are suitable for carbonated drinks and beer, you should try the Calbee Kataage Potato Black Pepper. The pepper flavor is irresistible!

The point is that you can also eat it as a snack potato chip.

If you repeat it many times, you may end up eating one bag! Really addicting! If you’re tired of the thin potato texture, this chip is a must-try! This is also considered as the royal road. I think it’s the pinnacle that I reached as a result of seeking chewiness.

Despite being a potato chip in nature, the Koikeya Suppa Mucho Chips in flavor plum surprisingly have a refreshing feeling when eaten.

Since plum-flavored potato chips are very refreshing, you’ll definitely like to eat them because it’s like the feeling of being cuddly.

As the name suggests, this product is finished in a refreshing dish with the acidity of plums. In order to bring out the deliciousness of the plums, you won’t feel the saltiness so much, and once you’ve eaten it, you won’t be able to stop. Even if you eat one bag, you will eat it without feeling guilty at all.

Seeing the photo of Calbee Potato Chips in the flavor Kansai Dashi Soy Sauce, you’ll be surprised at what the packaging looks like. This is also exquisite because it is Kansai soy sauce, and it has an indescribable lightness and addictive taste.

As someone who was born and raised in the Kansai region, Some people who already tried these chips feel a sense of familiarity with this name. You’ll also love the crunchy texture that Calbee has, and in addition to that, it is very delicious because it is sprinkled with a lot of powder that is packed with the umami of the dashi stock.

The Yamazaki Biscuits Chip in flavor Star Light Shio Flavor has a crunchy texture and is irresistible. Unlike other potato chips, I feel that the texture is crispy. If you enjoy the texture while eating, you will find yourself reaching for one piece after another. The amount in it feels a little small, but it’s a taste that will make you want to eat it regularly.

It is also thicker than ordinary potato chips and the container is a cylinder. It’s a little pricey, but if you eat this, you’ll feel like you’ve grown up, and you’ll feel full for some reason. It’s easy to put in a bag, so even long or small sizes are also awesome! It’s stylish.

What are the Most Popular Potato Chips in Japan?

Listed above are some of the popular Potato Chips in Japan that you shouldn’t miss.

Potato Chips are indeed the perfect finger snacks to pair with your favorite drink while watching movies or series with your loved ones. Do you have your new favorite potato chip snack in mind? Share your thoughts!