There are several mythical creatures like the Kappa, Yurei, Jorogumo, and the yokai when it comes to Japanese folklore. Yokai are supernatural creatures like ghosts, spirits, and monsters, and Shirime is one of them. It is known in Japanese writings, especially Japanese poetry.

The Japanese haiku poet Yosa Buson took a liking to this creature. So much so that he featured it in his many yokai paintings and poetry. Shirime is said to look like a human being from a distance, but you’ll realize it is a yokai with a closer look. Read this article to the end to know more about Shirime.

The term shirime in Japanese means two things. First, Shiri means “butt or buttocks”, and me means “eye”. So technically, the term means butt or buttocks eye. This is because it happens to possess a huge, bright, piercing eye on his buttocks.

Shirime is a Japanese ghost. It is one of the many yokai common in Japanese folklore. Since it is popularly known to have a buttocks eye, people now refer to its myth or fable as the legend of the buttocks eye.

Shirime is faceless but takes the physique of a human being. You would hardly notice its strangeness until you take a close look at it. According to myths, the shirime is a harmless creature whose sole aim is to scare people and stir up laughter.

Interestingly, it is believed that this ghost is closely related to the noppera bo; another faceless ghost that looks like a human, and Tenome – the legend of eyes for hands. It is known to visit the city streets late at night, crawling up on human beings to scare them.

Much like many ghosts, shirime does not eat. It feeds on the excitement or joy it gets from surprising and scaring people with its tricks. Its alternative name is nuppori-bozu. 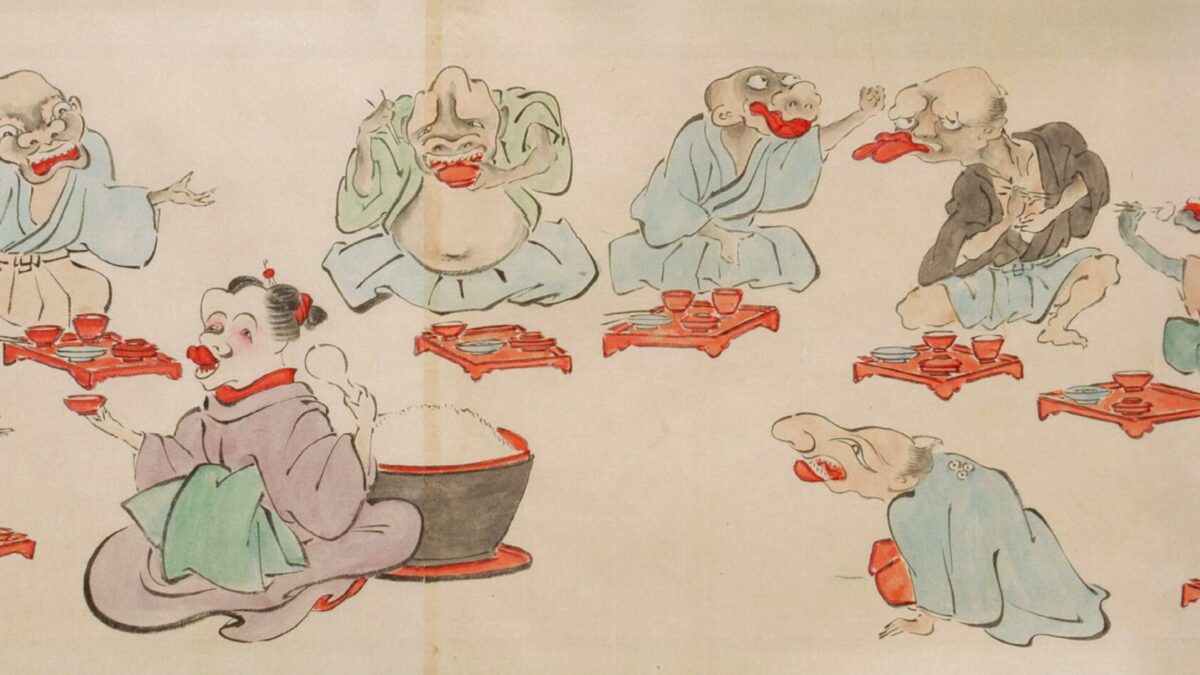 Like other yokai monsters, shirime has a particular appearance and behaviour that makes it stand out. Every yokai has a peculiar representation, and shirime is no different. Here’s how to identify the shirime.

You may be wondering what shirime looks like. This Japanese yokai is a faceless ghost that takes the shape of a human being when you look at it from a distance. The shirime is a strange creature. It looks like a shapeshifting yokai with the ability to surprise humans. It shows up unannounced and scares them with its big shiny eye just at the anus spot of its buttocks.

When you take a closer look, you will notice this facelessness before it goes on all fours, revealing the giant eye in the butt hole of its buttocks.

Key features of a shirime

What does a shirime do?

Contrary to most Japanese yokai monsters, ghosts, or bizarre creatures, the shirime does not eat humans, neither does it appear in their dreams. From nowhere, this monster appears at night, primarily to lonely travellers on the road to Kyoto, to surprise and scare them.

The shirime typically approaches travellers on the road late at night. It looks like a man wearing a kimono. It often tries to get the attention of its victims by calling out to them. Once it can get their attention, it asks for a minute of their time to show them something.

When they respond or before they do, it walks closer to them, strips naked, dropping its kimono on the ground. It then goes on all fours and walks away, showing off the shiny eyes on its buttocks. It spreads its butt cheeks so victims can see the giant eyes located in its butt hole.

Interestingly, the shirime does not do more than that. It is a strange harmless creature that walks away after being able to scare and surprise its victims. The satisfaction it derives is from making people scared. The act of the shirime is often interpreted as a sign of ridicule and disrespect.

Not much has been said about Shirime’s origin. Only a handful of documentaries on people’s encounters with the ghost, all because it is also known as nuppori-bozu. This name was given to this creature because it was believed to be closely related to the noppera bo.

The origin of shirime can also be linked to the haiku poet and artist Buson of the Edo period. He was known as one of the greatest poets in Japanese history. Since he liked the shirime so much, he included it in his yokai paintings.

He is the only artist to have written on the legend of shirime in the “Buson’s Yokai Picture Scroll.” In his story, he referred to shirime as nippori-bozu. The tale of shirime is not only a strange one, but it is also funny.

One popular legend of shirime is the story of a samurai on a journey, walking down a dark and lonely road to Kyoto. As he walked alone at night, he heard someone calling out to him to wait. “Who’s there?!” he asked nervously.

“Excuse me, sir, do you have a moment?” replied the stranger. The samurai then turned around, only to find a faceless man in a kimono. Before he could respond, the faceless man stripped off his clothes and bent over, pointing his buttocks at the astonished traveller.

A huge glistering eye opened up where the strange man’s anus should have been. The samurai was so shocked that he ran away screaming while the strange creature walked away.

As a Japanese concept, Yokai refers to monsters, spirits, ghosts, and goblins in the form of absurd creatures. They are often mythical yet attractive creatures that wander around and sometimes bewitch people.

The history of the yokai can be traced back to the Edo period when it first appeared in Japanese literature; folklore. Shirime is an example of a yokai.

The yokai phenomenon has become part of Japanese history and culture. Japanese belief in the supernatural has made the legends even more believable. To know more about Yokai, you can check out our previous article What is aYokai – Myths and Folklore.

Shirime as a yokai is part of Japanese cultural history. It has also played a role in Japanese pop. Culture inspired manga and anime and has been represented in Japanese artworks and paintings. It has also appeared in video games and books.

Although it hasn’t featured in many anime’s, it has made an appearance in a few. One anime movie that this strange creature was featured in is a Studio Ghibli animation known as Pom Poko, directed by Isao Takahata.

This Japanese Fantasy movie is a comedy-drama released in 1994. It features Japanese mythic creatures as its heroes and other shape-shifting characters like the raccoons from Japanese folklore. It also features the shirime.

In this anime, Shirime makes an appearance during, A Night Parade of One Hundred Demons scene. It was one of the hundred demons and was seen poking its eyes out of a garbage bin.

Shirime has also appeared in video games as a mythical creature. It was featured in the game Muramasa Rebirth. This game is a direct re-release of Oboro Muramasa, also known as Muramasa: The Demon Blade, on PlayStation Vita. The video game debuted in 2013.

Shirime is mentioned in the Encyclopedia of Beasts and Monsters in Myth, Legend, and folklore. This book was published in 2016 by Theresa Bane. Shirime made its first book appearance in Bosun’s Yokai Picture Scroll, written by the haiku poet Yosa Bosun.

In Japan, many people still believe in the existence of yokai. They believe these ghost creatures roam the streets in the dead of night or late in the night. The shirime is so silly that it is counted as one of the most loved Yokai in Japan.

Since it was introduced as a Yokai in Japanese folklore, it has gained some popularity. Japanese are known for their love for bodily humor, and their shirime character embodies this type of humor. Many people find it funny; some find it weird, and others don’t think about it.

Another reason why much Japanese love this yokai creature is because shirime is not a harmful creature.

Shirime, unlike other yokai or Japanese ghosts and monsters, is hardly featured. This isn’t quite stated but based on speculations, it could be because the shirime isn’t scary and is not a terrible monster. Whichever is the case, the shirime hopefully gains more grounds like the yurei and other yokai in Japanese popular culture.