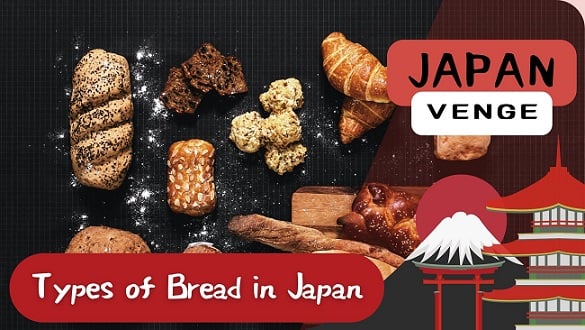 Bread is an indispensable part of the Japanese diet, and there are many types of it all over the world.

It ranks high among countless pieces of bread, such as croissants that have a fun crispy texture, bagels that are chewy and easy to combine with various ingredients, and melon bread and curry bread that are sold at any bakery.

If you’re interested in knowing the different types of bread in Japan, scroll down to this post as I will introduce you to the most common loaves of bread you can buy in Japan!

Types of Typical Bread in Japan

France, which produces a large amount of wheat, the main ingredient of bread, is famous for its baguettes, which have a strong image of French bread, and croissants, which have a distinct buttery aroma.

In addition, “focaccia” (France) is seasoned with olive oil and herbs, “pretzel” (Germany) with a salty heart shape, and “bagel” (USA) with an addictively chewy texture. has many different types of bread.

Freshly baked bread is not the best time to eat it

Bread has an image of being delicious when it is freshly baked, but it is said that the texture and aroma will be better if it is left for a while.

The “time” varies depending on the type of bread, and if it is bread, the moisture will spread all over and the texture will be even chewier after about 8 to 12 hours from completion.

A croissant (French: croissant) is a bread that is baked with butter kneaded into the dough. Originating in France, it means “crescent”. It is characterized by its crispy texture and sweetness.

Croissants are well-known as one of the famous breakfast bread in Japan which is known for having their unique curve-shape and soft texture bread.

Melon Pan is a type of sweet bread that originated in Japan. It is a bread made by putting sweet biscuit dough (cookie dough) on top of the dough and baking it.

The biscuit dough is thick and covers a wide area unlike any other bread, and is said to be the biggest feature of this bread. In the Kinki region, part of the Shikoku region, and part of the Chugoku region, which are mainly divided into spindle-shaped type, circular type, and other types, there is a custom to call circular melon bread Sunrise Surprise.

Curry bread is a type of cooking bread that uses curry as an ingredient. Although there is no set definition, most commercial products are battered and served fried or baked. Fried ones are also called curry donuts, and some shops call fried ones to curry bread and baked ones yaki curry bread.

Some of the curry insides are made with keema curry. It is less juicy than curry rice and is devised so that it does not drip. It is a popular side dish bread, and in addition to being sold by major manufacturers at supermarkets and convenience stores, it is often a specialty product of local bakeries.

Cream bread is a kind of sweet bread with custard cream inside. The founder of Nakamuraya, Aizo Soma, who was impressed by the deliciousness of cream puffs, thought of applying this to bread and started manufacturing and selling cream buns in 1904 (Meiji 37).

The cream bread that was released was accepted as a highly nutritious food at a time when people wanted to improve their physical strength, and it gradually spread throughout the country.

Anpan (English: Anpan) is a type of Japanese sweet bread filled with red bean paste. Many stores, including Kimuraya Sohonten, where it originated, sell it as “anpan” written in hiragana.

This type of bread can also be filled with other flavors like white beans or any type of filling depending on your preference.

Donuts is made by adding water, sugar, butter, eggs, etc. to the flour-based dough, and are generally sweet confectionery fried in oil. Some have a moist and fluffy cake-like texture, while others have a chewy texture.

READ MORE:  Shirime: The Myths and the Legend.

Although donuts are a common type of sweet bread worldwide, Japan has its own version that you must try.

The cinnamon roll is a type of pastry (wheat flour confectionery) that is popular in North America, Northern Europe, and Central Europe. Also called cinnamon buns or cinnamon swirls in English, it is believed to have been invented in Sweden.

Roll out the yeast-filled bread dough into a large rectangle, spread a thin layer of butter on the surface, sprinkle cinnamon and sugar evenly, and roll into a roll. Sometimes raisins are rolled inside. Cinnamon rolls are made by slicing them into round slices for each serving and baking them in the oven with the cut side up.

Furthermore, the baked product is coated with a sugar called icing (it is generally made only with powdered sugar and water, but butter, milk, egg white, cream cheese, etc. may be added, and flavoring and coloring may be used), sugar syrup, sesame-shaped sugar called nib sugar common in Northern Europe, and frosted sugar are sometimes used as toppings.

Calzone (Italian: calzone, meaning “stockings” or “trousers”) is an Italian turnover (double-sided baked pastry). It is made from the same ingredients as pizza and is folded into a crescent shape and cooked.

Calzone fillings are typically tomato and mozzarella, as well as other common pizza topping ingredients.

An English muffin is a round loaf of yeast-leavened bread that is dusted with cornmeal. It is eaten at breakfast in North America and England, along with bacon, fried eggs, and sausages on other salty breakfast items. It is distinguished from the American confectionery muffin.

It is made by wrapping various ingredients in a dough made from kneaded flour and baking it in the oven or frying it in oil.

Stollen (German: Stollen) is a German sweet bread. In Dutch, it is called stol. The notation Stollen, which is widely recognized and used in Germany, is not the correct pronunciation for German.

In Germany and the Netherlands, the food traditionally eaten at Christmas is called Christmas stollen (German: Christstollen, Weihnachtsstollen, Dutch: kerststol).

Grissini (Italian: Grissino (single) Grissini (plural)) are long, thin bread sticks with a cracker-like texture. Born in Turin, Piedmont, Italy, in the 14th century. In Italian restaurants, it is served in baskets as one of the table pieces of bread. It can be eaten as it is, but it is often eaten with prosciutto (cured ham) wrapped around it.

It is also served as an accompaniment to salads and soups. Legend has it that when Vittorio Amedeo II was a prince, he was sickly, so the royal family sought bread that was easy to digest, low in moisture, and did not spoil easily.

Pita (English: pita, Hebrew: פִּתָּה, pitah, Arabic: كماج‎, kmaj‎, Turkish: pide), pita bread is a flat, round bread with a diameter of about 20 centimeters. It is a food culture that is widely seen on the Mediterranean coast, the Middle East, and North Africa.

Chausson aux pommes (French: Chausson aux pommes) is a French sweet bread (viennoiserie) made by wrapping apples in folded pastry and baking it with a pattern on the surface. Chausson means “slipper” and is named for its resemblance to a slipper.

What are the Types of Bread in Japan

Since we have listed the most famous types of bread in Japan, getting delicious bread will never be an issue. Which one is your fave on the list?