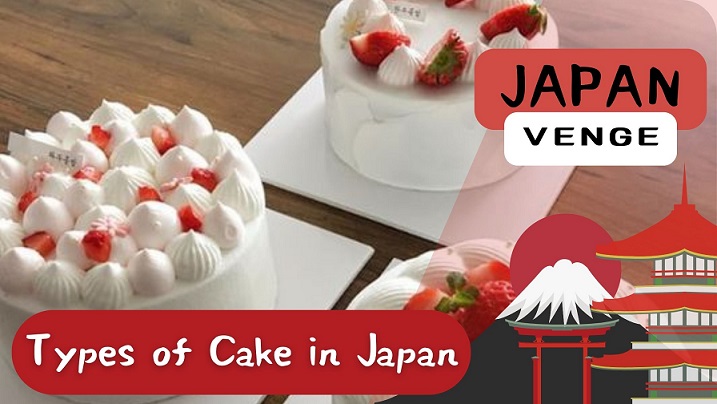 Cakes are essential sweets for celebrations such as birthdays and anniversaries. Many people buy it as a snack or a small reward for themselves.

Although cakes are quite common in any country, Japan has its very own version to introduce which some have a very significant meaning for most Japanese!

I scoured the town to find the best cakes for you to try when you come and visit Japan. Aside from savory ramen and other famous Japanese foods, get your tummy ready with some sweet and delectable cakes in Japan.

In this post, I will introduce the popular Types of Cake in Japan. Scroll down and get yourself ready with these yummy cakes to try!

Top 15 Types of Cake in Japan

Shortcake is a kind of cake in Western confectionery and one of its famous versions is the Strawberry Shortcake. However, even its form and definition vary significantly from country to country.

When it comes to Japan, this is not just an ordinary cake as this is well-known as a traditional holiday cake which is a best-seller cake during December. This is a sponge type of cake with whipped cream filling in between and topped with whole fresh strawberries.

Recommended: Types of Japanese Mochi You Should Try

Montblanc is a yellow cake that is originally from France. It is called so because it was made to resemble the shape of a mountain.

Chocolate cake is a cake containing chocolate or cocoa powder as the main ingredient. The basic method is to mix cocoa powder with the cake batter and bake it.

Even if chocolate is included in the ingredients, if only a small amount is used as a decoration, it is not a chocolate cake (however, cocoa powder is sprinkled on the surface and may be used as a finish).

Generally, the whole cake has a chocolate color due to the color of the ingredients. Chocolate cakes are in demand in a variety of ways, from everyday desserts to birthday cakes and Christmas cakes. It is also called gateau au chocolat, derived from the French “Gâteau au chocolat”

Milk crepes (French: Mille crêpes) are a type of cake. A crepe is made by stacking several crepes with cream or fruit sandwiched between them. The name is French for “a thousand crepes,” not a combination of “milk” and “crepe.” In practice, around 20 crepes are often used.

Chiffon cake is a type of sponge cake that has a fluffy and cloud-like texture. It’s usually O-style and the most common flavor is vanilla.

This type of cake uses beaten egg whites which creates the volume for it to look fluffy. Plus, you can easily determine this type of cake as it is the only cake that has a hole in the middle part.

A tart is a kind of sweet. Derived from the Latin “tōrta”, which means “baked goods”. The word “tarte” itself is French (“Torte” is German).

Although it originated from another country, Japan is also well-known for its own Tart. One of its famous tarts is called the cheese tart which is also known as the Japanese-style lava cheesecake. I know cheese lovers will totally enjoy this pastry.

Tiramisu (Italian: Tiramisù, Venetian: Tiramesù [tirameˈsu]) is a type of dessert that originated in northern Italy. The etymology of his Tirami su! comes from the Italian for “pull me up” and in turn “cheer me up”.

If you love matcha on the side, I would recommend you try the matcha-flavored tiramisu cake as it is well-known as Japan’s twist. On the other hand, the classic Tiramisu cake is also worth trying!

A cheesecake is a cake made with cheese. It is roughly divided into warm baked soufflé, hot water soufflé, and cold rare. Japan’s world-famous cake should also be on your bucket list to try especially when you’re in Japan.

Since it’s Japan’s pride, most local bakery and cafe’s in town offers this cake so it’ll never be a hassle for you to try this type of cake.

Mille-feuille (French: mille-feuille) is a type of confectionery which originated in France.

It is a confectionery with a long history, and there are various shapes and manufacturing methods, but in modern times, the cream is sandwiched between three pieces of pie dough called feuilletage (French: feuilletage) or part feuilletée (French: pâte feuilletée), and the surface is covered.

It is usually dusted with powdered sugar or sugar-coated.

Cream puffs are a type of pastry made by baking dough so that the inside is hollow and then filling the hollow with custard cream. It is a confection called “chou à la crème” in French.

As for the filling cream, there are various variations such as chocolate cream and cream using fruit juice (strawberry, melon, mango, etc.) depending on the pastry shop and each manufacturer.

Sachertorte (German: Sachertorte, Sachertorte or Sachertorte in Vienna) is a confectionery (torte) offered at the Hotel Sacher and the pastry shop Demel in Austria. A kind of classic chocolate cake. Also called Sachertorte.

This type of cake is one of the famous cakes that you can find in almost any cafe in Japan. If you love coffee that much, I recommend you try this cake as it complements any coffee-based drink.

A pound cake is a type of butter cake. It was named “pound” cake because it was made with one pound each of flour, butter, sugar, and eggs. A family cake that originated in Brittany.

If you’re craving some fluffy, light-flavored cake that almost looks like a loaf of bread, pound cake should come to your mind first. Besides, it will be the easiest cake for you to make as it only has four ingredients. This type of cake is mostly left undecorated which is also perfect for a small celebration.

Pumpkin pie is a traditional North American dessert. If you’re craving some pie while you’re in Japan, no need to fuss! You can also enjoy this type of cake as it is included in the list of famous cakes that you can try in Japan!

This type of cake is most commonly known as a winter special as most Japanese celebrate their holidays with some Pumpkin Pie. There are a lot of bakery stores that offer this type of cake but if you like, you can always make your own at home.

A carrot cake is a cake with grated carrots mixed in the dough. By mixing carrots, the ingredients become softer and the resulting cake becomes softer and denser. The flavor, texture, and appearance of the carrot itself are also added.

Eclair is a type of French pastry which is also known as choux pastry. It is one of the well-known pastries in Japan which has different fillings and fancy decorations on top. This is also one way to celebrate Japanese culture.

If it’s your first time trying this type of cake, I would highly recommend you to try the sakura eclair.

What are the Famous Cakes in Japan

Here I have listed the best cakes that you can try while you’re in Japan. Although some of the cakes listed here are common and can be tasted in any country, you can have it in Japan version with its own flavor.

I hope I helped you in discovering some types of Cake in Japan. If you’re a foodie who wants to try some Japanese foods, I would also recommend trying out these yummy cakes!