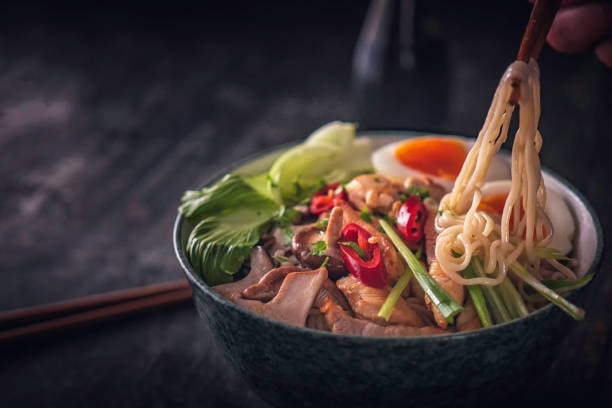 Japanese noodles are a staple meal seen as conventional foods. They come very handy in most Japanese homes and have lots of options.

So if you’re visiting for the first time, you would most likely see a type of Japanese noodles that you will love. They are either served chilled with dipping sauce, soup, or hot dishes. With the variety of noodles Japan has, you can’t be bored.

Varieties such as Udon, ramen, soba, and other noodle soups are standard options. Interestingly, different regions in Japan prepare their noodles in a way unique to them. Here’s what you should know about Japanese noodles.

The origin of Japanese noodles can be traced as far as the 1800s. They are believed to have been introduced by Momofuku Ando, who brought the Ramen instant noodles to Japan.

Japanese noodles were initially a meal for the elite, but even the middle-class families were able to afford them after some time. If you are a Japanese noodle lover, you should be grateful to Momofuku Ando.

There are several types made with various ingredients. These noodles come in different sizes, shapes, tastes, and consistency. Some of these noodles are made for special occasions. These are some Japanese noodles that are pretty popular in Japan and around the world. 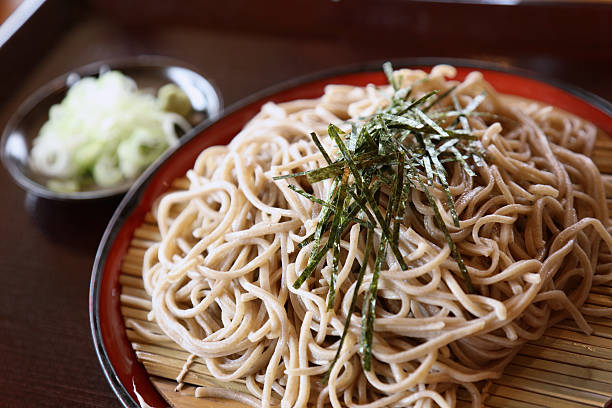 Soba is a very delicious and unique Japanese noodle. It is made with buckwheat flour and wheat flour and is usually dried or fresh. Soba noodles are thin, thinner than udon noodles. They are often served with hot or cold dipping sauce, known as Tsuyu.

The ingredients used to make Soba give it a nutty flavor, light to dark brown color, and a unique texture that distinguishes it from other Japanese noodles. Soba is traditionally eaten on new year’s day in Japan, and it is believed to mean prayers for long life. 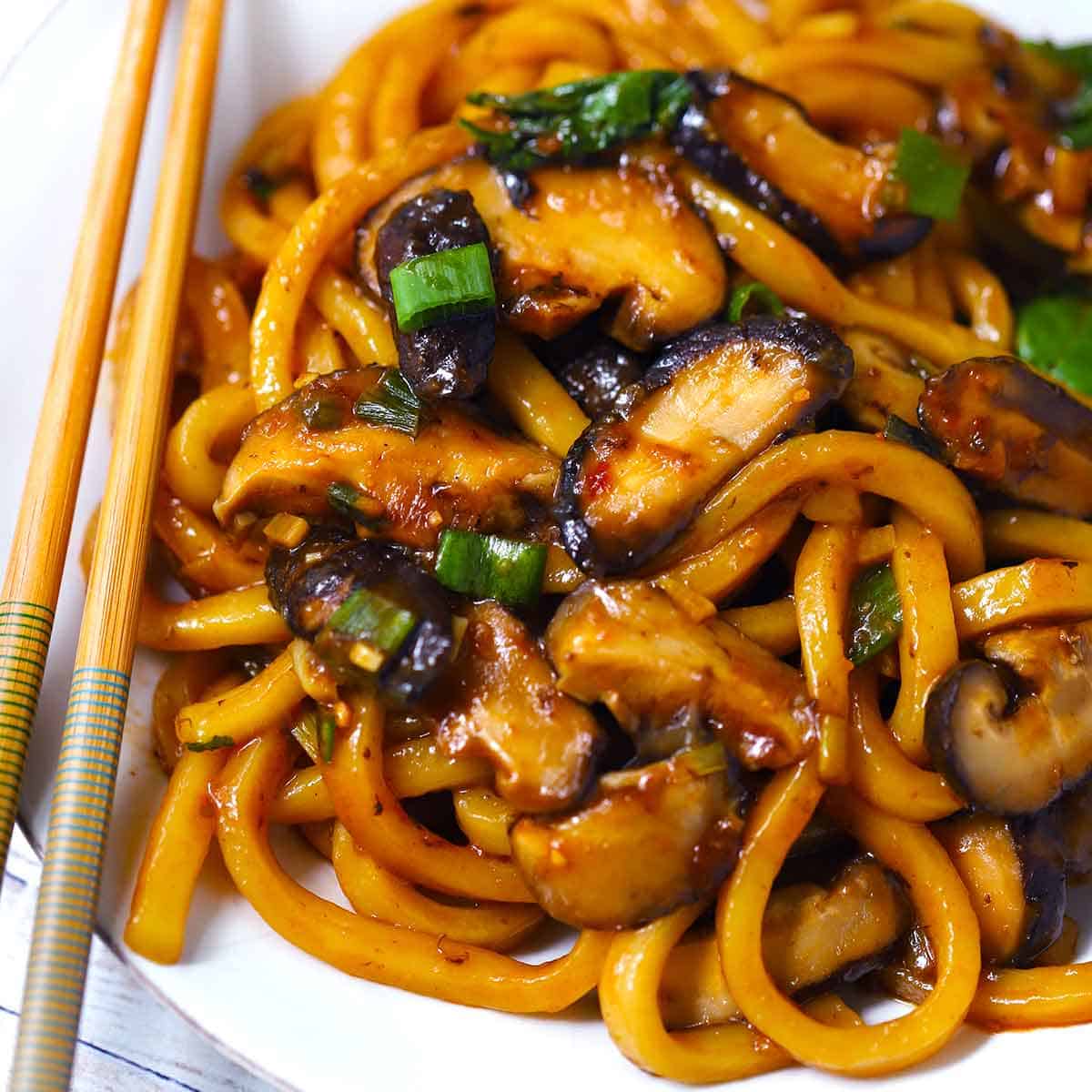 Udon is another type of Japanese noodle that is quite popular in Japan. It is fat, round, and chewy. It also has a unique bounce, so they dangle from your chopsticks when you eat them with chopsticks. Udon is made with white flour and served chilled. It is also paired with dipping sauce, but more than that, you can enjoy it with a broth soup.

To enjoy Udon as a simple meal, you can prepare it as Kake udon. Kake udon is a simple soup made with soy sauce, dashi, and mirin. There are different types of Udon like the Kitsune Udon, which is topped with sweetened aburaage, 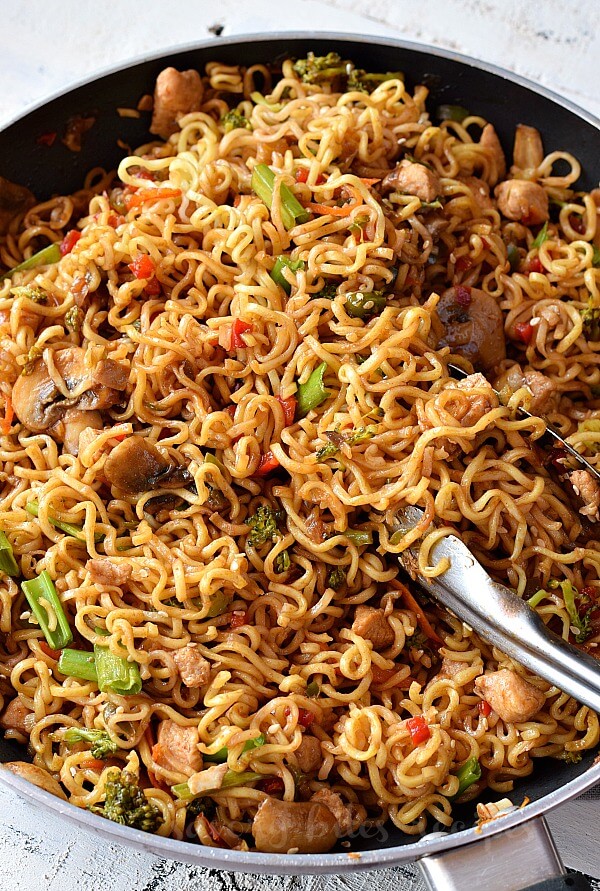 Ramen is the most popular type of Japanese noodle. It was the first Japanese noodle to have been imported from China. It became popular in the 20th century, and it has remained like that to date.

Ramen is often cooked with alkaline water, responsible for the yellow color and the signature curl. These thin and springy Japanese noodles vary from region to region, depending on the broth used to prepare them.

Interestingly, different areas, cities, and restaurants have their signature ramen preparation. However, Japan’s most common ramen style is the Tsukemen found in Hakata-Ku Fukuoka. At the bottom of this ramen is Tonkotsu– a creamy pork bone broth noodle with a delicious taste.

Ramen dishes are served in a broth flavored with salt, dashi, miso, pork, or soy sauce. It is also served with various toppings, meat, and vegetables. Interestingly, different soups can be served with ramen like Tonkotsu soup, Shoyu ramen, and miso ramen. 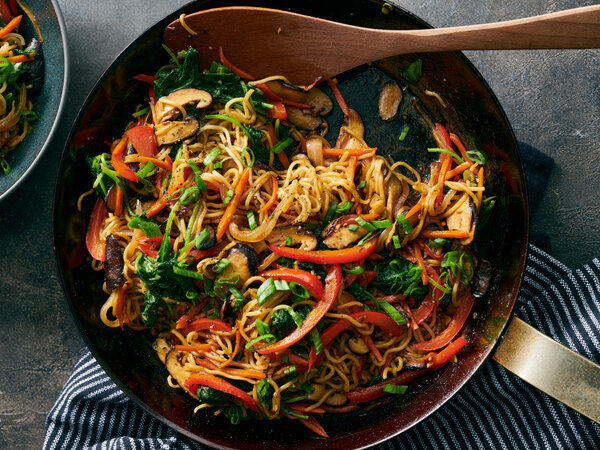 Contrary to the name, Yakisoba is quite different from Soba. It is a stir-fried wheat flour noodle made from wheat flour vegetable oil with salt. Yakisoba refers to the barbecued Japanese recipe commonly used for these noodles.

Yakisoba is very similar to ramen noodles. It is usually mixed with vegetables(cabbage, carrots, and onions), meat, and sauce. Yakisoba is prepared with strong flavors like the Yakisoba sauce, salt, and pepper. It is also topped with green seaweed powder – aonori, red pickled ginger – Beni shoga, mayonnaise, and Katsuobushi.

Yakisoba is popular street food. You can find it at food stalls and restaurants and all over Japan. It is also common during festivals. 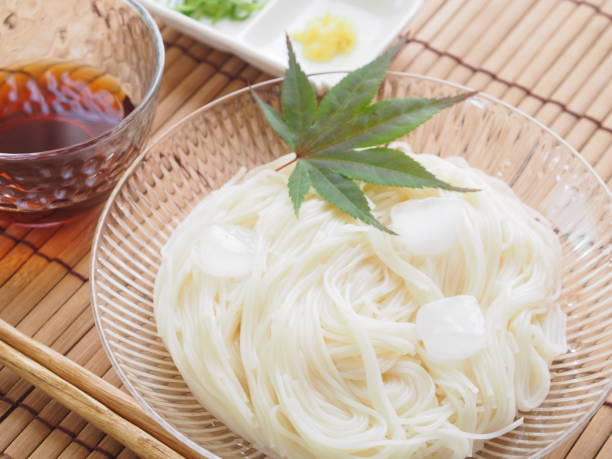 Somen are very thin noodles made from white wheat flour. They are not as chewy as Udon. Somen noodles are usually served cold, making it the perfect summertime dish. It is believed that this Japanese noodle has its origin from Nara. Interestingly, it is the simplest noodle style to make.

In some areas, Somen is prepared using traditional methods. The dough is first made and kneaded for the noodles before adding to a soup or served cold. This kneading makes them sprinkler and stronger.

Although Somen is perfect for summer, it can also be eaten in winter with a warm soup called Nyoman. Somen are similar to Italian angel hair pasta.

If you want to spice up your Somen, a fun summertime style to serve Somen is Nagashi Somen, also called the flowing Somen. Here, noodles are placed in long bamboo flumes diners where people are meant to catch the noodles as it passes by. 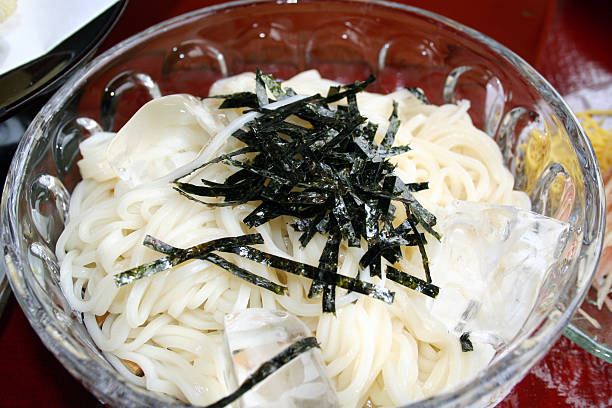 Hiyamugi is a thin, light wheat flour noodle. It is thicker than Somen and Udon and is prepared the same way Somen and Udon are prepared. It is white but sometimes mixed with pink or green colored noodles.

Hiyamugi noodles are somewhere in between Somen and Udon. However, unlike Somen noodles that are stretched and then sliced with a knife.

Where to Buy Japanese noodles.

Japanese noodles, especially ramen, are very popular worldwide, so you can buy them in Japan and outside Japan. You can find them in your local Asian specialty stores, or you can order them from Amazon.

Some are sold dried, and some are sold vacuum-sealed, so they might need to be revived to get the chewy texture you desire. All you need to do is put the noodles in cold water to open up before you cook them.

It is essential to know the nutritional value of the foods we eat. As much as it is nice to eat delicious meals, we all need to be concerned with our health. Interestingly, Japanese noodles are high in fats and carbs but are low in calories, protein, and fiber.

One serving of Japanese noodles contains 250 calories, 1g of fats, 53g carbs, and 8g protein. Of all the Japanese noodles in existence, Soba noodles are believed to be their healthiest since they are made from buckwheat which is rich in nutrients and offers several health benefits.

Soba is a good source of manganese, thiamin, protein, and soluble fiber. In Japan, it is said that Soba serves as a restorative and energy booster. Apart from Soba, Udon is another Japanese noodle with health benefits. Udon goes easy on your stomach.

Japanese noodles are not just delicious; they are also easy to make. If you are new to Japan and considering getting the best out of your trip regarding Japanese confections, you should try one of these noodles. They are the absolute best. You can also try the conveyor belt sushi.

Suppose you are concerned about the health implications of eating Japanese noodles. You don’t have to fret; they are nutritious. However, to play safe, you can opt for Soba noodles, which are healthier. Trying out these noodles is a great way to experience the culture in Japan.