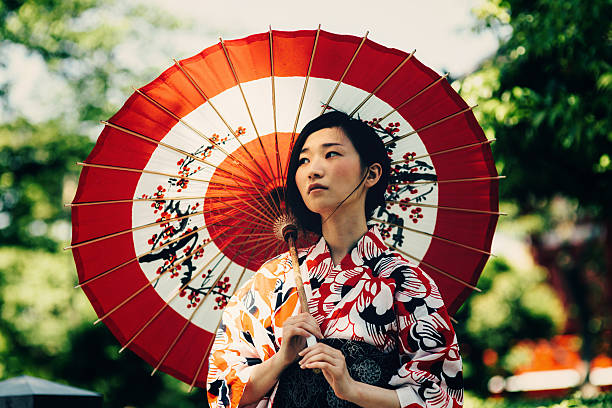 Geisha is one of the oldest and most celebrated traditions in Japan. It is a part of Japanese history and has been so for many decades. In Kyoto, a geisha is called geiko or geigi. It means “artisan.”

This term is used to refer to a class of female performance artists or entertainers trained for preserving Japanese art. They are trained in traditional Japanese art styles such as music, dance, and singing.

Most often, a geisha entertains her guests with dance, traditional Japanese music, and singing at a banquet. Though Geisha is a popular Japanese tradition, there are a lot of misconceptions surrounding it, as opposed to what it is and what it takes to become a Geisha.

In this article, we will look at all you need to know about Geisha. 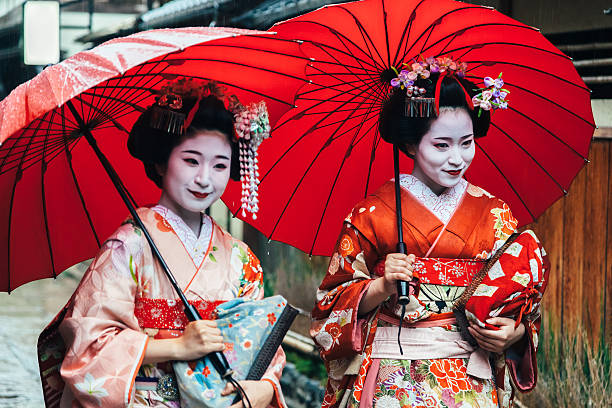 In traditional Japan, Geisha was a revered profession. They were regarded as entertainers at incredible entertainment centers across Japan. Geisha has first introduced in the 1700s quite some centuries ago but did not rise to fame until the 1800s.

By this time, they were invited to banquets or entertainment centers to perform. But as this practice became more and more popular, with more people specializing in this art form, there was an emergence, Geisha was born.

You should know that Geisha became fully a profession and was recognized as such in the second half of the 18th century. Though the majority of Geisha is female, male Geisha exist. In the past, the first ones were men who entertained customers in waiting rooms. These customers were visiting the ‘oiran’

With time, these popular oiran services dwindled, elevating the status of Geisha as the profession became more elite-like. Trained Geisha were recognized throughout Japan with a great reputation. Since entertainment was seen as a good thing for the people.

However, during World War II, there was a decline in the practice of this occupation. In addition, customers also declined due to disposable income. Worse than that, many Geisha districts were shut down in the mid-1940s, forcing them to find work elsewhere.

After the war, these Geisha practices were revived but sadly, most original entertainers did not return to the art. The Geisha who continued these practices incorporated western influences that affected their style and method of entertainment. It is for this reason that the misconception of Geisha arose.

READ MORE:  What is Shotacon?

Not much has changed with the Geisha profession as it still holds the same morals and standards as it did in the past. There are only a few changes in the geisha of today which has helped integrate them into this modern society.

One of the few differences between the Geisha practice of the past and the present is the meaning of the term “mizuage“. In the past, it was the ‘coming of age ceremony for a Maiko (a Geisha apprentice). One significant thing associated with this celebration was the loss of one’s virginity.

Interestingly, this practice has been legally banned in present-day Japan. Another difference is the age that an individual gets to before starting the training to become a Geisha. In the past, a child starts this training as early as six years while presently, they start mostly in their teens and some after they are done with high school.

In today’s Japan, there are less than 200 geisha. This is due to the difficult training and sacrifice. To become a geisha, you would have to sacrifice your youth and you will not get married except you leave the profession.

Geisha is seen as a highly prestigious and very well valued profession. Nevertheless, it is a hard sacrifice that many are not willing to pay. Places where you can find Geisha include; Kyoto, Tokyo, and Kanazawa. Kyoto, however, holds the most prestigious of Geisha.

In Kyoto, the Geisha (Geiko) still live in Okiyas and have teamed with tea houses (ochayas), tourist companies, and Japanese restaurants (ryoteis) to expand their audience reach and give once in a lifetime experiences.

The role of a Geisha girl. 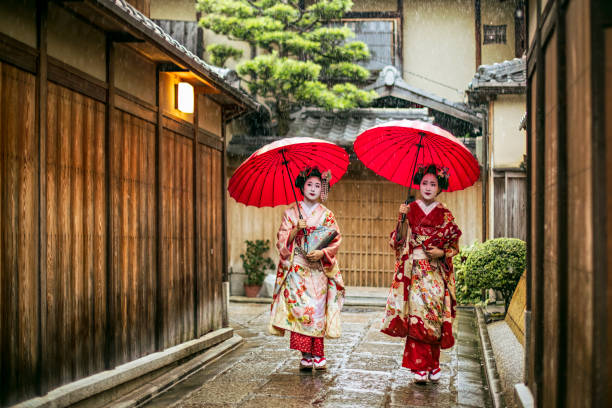 Geisha in Japan is a display of a lifelong tradition that is part of Japan’s lifestyle and culture. Its role is first to entertain the audience. A Geisha must master several art forms which are basically traditional Japanese dances, singing, and poetry, flower arranging, and playing of traditional instruments.

The dances include the ones involving the use of fans. In addition, they are also skilled in the art of conversation. Entertainment may be the cure of every Geisha practice and performance, but they are undoubtedly custodians of Japanese culture and traditions.

READ MORE:  What is The Meaning of Fujoshi?

In today’s world, they are highly respected and tourists pay huge sums of money to watch them.

Difference between Geisha and Maiko. 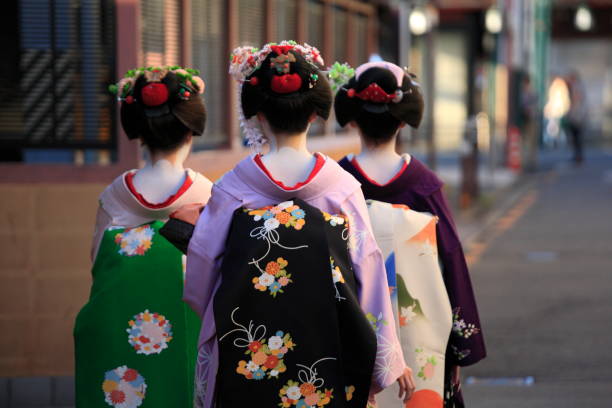 Some people often cannot differentiate between a maiko and a geisha. But a geisha is not maiko, and a maiko is not a geisha. A maiko is a geisha apprentice who undergoes years of intense training with hard work and dedication to become a Geisha.

There are certain ways to help you differentiate between a Maiko and a geisha. We have compiled a few for you. They include; age, hairstyle, makeup, kimono, and footwear.

This is important. Since Maiko are apprentices, they begin their training early and are usually teenagers. In Kyoto, the age for a Maiko is within 15-16 years while in Tokyo, it is within the range of 16-17 years. A Geisha on the other hand begins at 21 – 23 years.

Their looks help to tell the difference. Geisha, wear perfectly styled wigs while Maiko styles their natural hair into buns.

Geisha wear makeup only when they have special performances while a Maiko is always seen wearing a full-face white makeup during their training. Close to their hairline, a band of skin is left bare.

For the Maiko, during the early stages of training, only the lower lip is painted red but as they advance, both lips will be painted in a thin red line. When they become complete Geisha, their lips are painted full.

The kimono a Maiko wears is usually long-sleeved and colorful while a geisha wears a more subtle kimono that has just one color. The kimono is short-sleeved.

READ MORE: Yukata vs Kimono: 10 differences You Should Know.

Training to become a Geisha.

Becoming a Geisha is no ordinary easy feat. It requires years of dedication and practice to transform into an experienced, full-fledged Geisha. There are several Geisha codes that they follow strictly.

From childhood to adulthood

In time past, women in charge of geisha houses bought young girls within the ages of six and ten from their poor families. These women are often called Okaasan which means mother. They trained the girls, taking care of their education and training until they become adults.

When these geisha apprentices called Maiko to begin to master their different specialties, they complete their training by accompanying a full-fledged Geisha to an appointment. During this time, the older geisha passes her knowledge and skill to the Maiko.

She is introduced to the circle of geisha and to succeed, she has to build her customers and get noticed. This is often where the mizuage ceremony takes place.

When the girls fully become Geisha, they work in the Okiya to pay back their debt. Since they were bought and trained for free. When they have cleared their debt, then they can start earning.

Presently, the practice and training to become a complete geisha are shorter. Though most of the practices are being adhered to, the age for a girl to begin the training is between 16 and 18 years. Also, it is more of a voluntary thing. Girls are no longer bought.

How you can spot a Geisha in Japan.

If you cannot afford to have private Geisha entertainment, the following tips will help you achieve your Geisha experience.

– There are certain festivals where geisha and Maiko usually attend. Some of them are; Yasaka Shrine Setsubun – February 2nd – 3rd, Higashiyama Hanatouro Festival from early to Mid-March, and Kyoto Gion Festival from July 1st to 31st.

– You can hang around Hanami-koji-Dori Gion and Shiji-Dori. Geisha activity usually goes on in these areas.

Knowing what Geisha is will help you understand the art and better appreciate it. As efforts are being made by Japanese society to teach the world about Geisha, you should have an in-depth knowledge of it.

Also, before you have a Geisha experience, you might need some kind of connection, which takes time to plan. So if you are planning to have the time of your life in Japan, do make sure to plan for the Geisha experience.