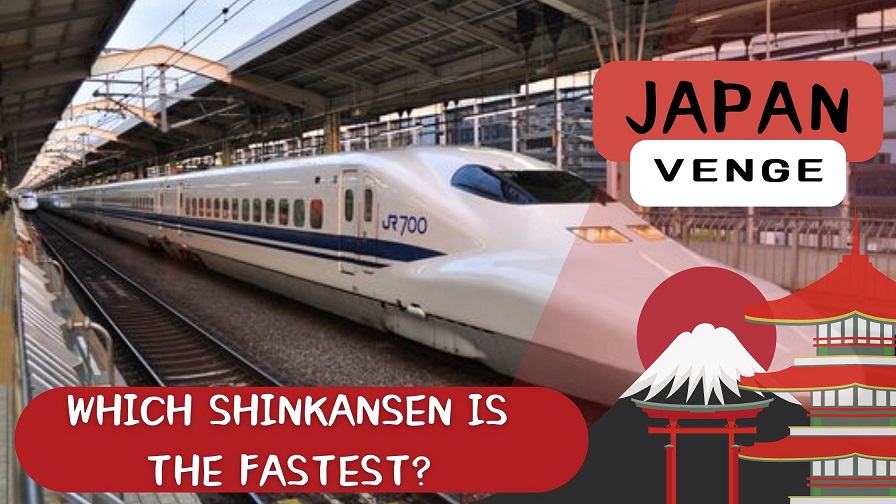 Japan’s Shinkansen boasts top-class perfection in terms of speed, visuals, and performance, but have you ever wondered which Shinkansen is the fastest?

This time, we will introduce Japan’s successive bullet trains in order of speed.

When the Hokuriku Shinkansen Nagano Station – Kanazawa Station extension opened, it was jointly developed and introduced by JR East and JR West, and in addition to the new set “Kagayaki”, “Hakutaka” and “Tsurugi”, from 1997 Tokyo Station – Nagano.

The E7 series and W7 series are Shinkansen bullet trains with almost the same specifications, just with different names for East and West JR.

It is unique in that it has a Japanese-style concept, and although it operates at a modest maximum speed of 260 km/h, it connects Tokyo and Kanazawa in just 2 hours and 28 minutes.

Introduced for the opening of the section between Shin-Yatsushiro Station and Kagoshima-Chuo Station on the Kyushu Shinkansen on March 13, 2004. It has won the Good Design Award.

The Kyushu Shinkansen, which connects to Kagoshima, is relatively new among all the lines.

Passengers are also entertained by different designs each time they see it, and they have the nicknames Sakura and Tsubame. Although it can only reach speeds of up to 260 km/h, it boasts an average speed of 202 km, which is quite fast.

Regarding the operation of Dr. Yellow, details such as sections and running times are not announced at all, so it is said that “witnessing Dr. Yellow makes you happy.”

It is very popular because it is a vehicle that you don’t often see and its color stands out, and many related products such as Plarail and model trains are on sale.

Dr. Yellow has long been in charge of inspections on the Tokaido and Sanyo Shinkansen lines, and now travels all over the country from Hokkaido to Kyushu.

Number of production: 7 cars per train

Since the opening of the Tohoku Shinkansen and Joetsu Shinkansen in 1982, the 925 series has been used for overhead wire and track inspection on the Shinkansen lines under the jurisdiction of JR East.

Due to the opening of the mini-Shinkansen, which could not enter the line, and the deterioration of the rolling stock itself, measurement data at the same speed as the maximum speed of 275 km / h for commercial trains were required.

In 2001, it was developed based on the E3 series, which was adapted to the vehicle limits of conventional lines, in response to the need to shorten the time and the need for an inspection vehicle that could directly connect to new stations.

Developed by JR East based on the E3 series, the East Eye reaches a maximum speed of 275 km/h and is said to be the fastest inspection vehicle in the world. Currently, we are responsible for inspections throughout eastern Japan, including Tohoku, Hokuriku, and Hokkaido.

Also Read: Why is Japan Called the Land of the Rising Sun?

In addition to raising the maximum speed of the E3 series from 240km/h to 275km/h, the body is made of aluminum alloy, and the bottom of the body is smoothly covered with a cover to prevent snow from entering in winter. It is also a feature.

The maximum speed is 130 km/h in the conventional line section, and when it merges with the Tohoku Shinkansen, it is connected to the E5 series, etc. to increase the average speed, and in the Shinkansen section, it is 275 km/h, which is comparable to the full standard.

Commercial operation at a maximum speed of 300 km/h, which is equivalent to the 500 series, was realized for the first time.

A type that produces one of Japan’s leading average speeds

With a maximum speed of 300 km/h, it is one of the average-speed vehicles in Japan and is active under the name of Hikari and Kodama.

The fastest transit speed of 300 km is between Himeji and Hakata, which is the route of the Sanyo Shinkansen. An improved N700A was introduced in 2013, and a kind of Hikari Rail Star of the N700 series with a different design is showing off its presence.

It was developed as a new Akita Shinkansen vehicle to replace the E3 Series 0 series, to operate at a maximum speed of 320km/h on the Tohoku Shinkansen section. It won the Laurel Award on May 26, 2014, and the Good Design Award on October 1, 2014.

Connected with the E5 series on the Tohoku Shinkansen

The current maximum speed is 320 km/h, even though it is a mini Shinkansen, which is said to be the fastest among the Shinkansen currently in service, along with the E5 series.

The E5 series was developed to run at a maximum speed of 320km/h on the Tohoku Shinkansen and began commercial operation on March 5, 2011.

With the advent of the E5 series, a new fastest type “Hayabusa” was set. It is positioned as a substantial successor to the E2 series and is currently the main vehicle of the Tohoku Shinkansen.

The E5 series recorded a maximum speed of 320 km/h between Utsunomiya and Morioka.

The E5 series of Tohoku Shinkansen, characterized by its visual appearance with a very long nose and precious Joban green, has recorded a maximum speed of 320 km / h between Utsunomiya and Morioka.

In the future, it is expected that the speed will be increased to 360 km/h, achieving one of the fastest passing speeds in the world.

The Chuo Shinkansen is a scheduled Shinkansen route from Tokyo to Osaka.

This is the first Shinkansen line to use a superconducting linear system and is commonly referred to as the “Linear Chuo Shinkansen” on the commentary website established by Central Japan Railway Company (JR Tokai) and in media reports.

Since it is intended for high-speed transportation, it is constructed using a superconducting magnetically levitated linear motor car “Superconducting Maglev,” which is capable of traveling at high speeds of up to 505 km/h on a straight route.

Since there is no friction between the wheels and rails like in railways, it is possible to run at ultra-high speeds.

So far, we have introduced the speed rankings of the next Shinkansen trains in Japan. The first place is the Linear Chuo Shinkansen. No wonder why as it features the best characteristics that a Shinkansen has to offer.