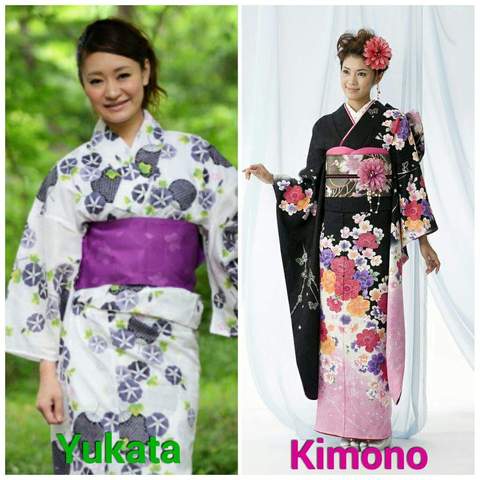 Both Yukata and Kimono are renowned traditional Japanese garments that have become a global fashion statement because of their beauty and style.

Both are unisex, full-length T-shaped robes that have long sleeves and are secured with a decorative belt.

These similarities may cause the average joe to mistake one for the other, but there are subtle differences between the two.

This article will help shed some light on those variances between these two garments that a person who isn’t well versed in Japanese culture wouldn’t be able to identify on his/her own.

The Kimono has a Chinese origin as the first Kimonos were introduced to Japan by Chinese envoys in the Kofun period. This mix of cultures led to Chinese modes of dressing being adopted by the Japanese.

The Kimono became vastly popular in Japanese court society. The initial designs eventually developed with more layers being introduced for women and colors being used to show the ranking of men.

Historically, the Yukata is a casual style of kimono made of cotton and worn traditionally as a bathrobe.

It comes from the word yukatabira meaning hot water bath.

Japanese warriors later also wore it and by the Edo era, it was widely worn by the public when public bath became a popular recreation in Japan, such as age and the sacredness of social activity.

Another difference between Yukata and Kimono is that Kimonos have medium-length sleeves and there are some with sleeves so long they touch the ground.

The long sleeves were worn traditionally by spinsters, which enabled bachelors to identify which women were available for marriage.

Brides wear kimonos with sleeves that touch the ground. This kimono is coated in gold, heavily embroidered, and often contains a sophisticated design on the skirt. Five small white family crests appear on the sleeves, front and back.

For decades, the color choices have become more restricted, with widows often wearing only black, grey, or brown kimonos.

Unlike the yukata whose sleeves aren’t any longer than fifty centimeters, not long enough to touch the floor.

The yukata is rather akin to a dressing gown or bathrobe in terms of style and is usually worn with less formality and accessories than a kimono.

Expensive silk or elaborately ornamented kimonos are not usually washed; hence, they are worn with an inner layer, referred to as a nagajuban, which protects the outer garment from dirt and moisture.

While Yukata are not as difficult to clean, eliminating the need to wear a nagajuban. The obi or sash is often described as the bane of the kimono wearer.

Kunio Yanagida, a Japanese author, scholar, and folklorist in his book ”Japanese Manners referred to the obi as one of the three apparel wonders of the world. But obis can be works of art themselves, especially when decorated with an elaborate type of embroidery the Japanese learned from the Chinese.

A woman may wear a kimono for fifteen or twenty years, but each time she adds a new obi it becomes a different garment.

If you want to purchase a Yukata or Kimono, you will get a wide range of styles to choose from, especially for women.

These styles include Komon, Furisode, Iromuji, and Homongi. Also, every Kimono is worn along with a lining that is worn underneath. Unlike the Yukata, there is no such lining worn, and its styles are simpler. You get a choice in style differences.

Both kimono and yukata have different obis but besides the wide range of variation, there are some differences in the items and materials used to make them.

Also, men and women do not tie the obi the same way, and women have a lot more accessories than men.

These accessories are used more with yukatas than with kimonos. Kimono obis are wide, and for men, there are obis called “Kaku-obi”   which are used for both kimono and yukata. For women, there are plenty of items around the obi such as “obi pillow”, “obi tightening”, and “obi fried.”

6. The difference between styling and use.

When comparing Yukata and Kimono, there is a difference in styling and use. Beauty can be created through a competent combination of all these items.

Compared to the kimono, the yukata obi is shorter. However, as opposed to yukatas, which do not require the use of items around the obi, so more techniques can be used to tie it. Since the materials used for the obi are also different, it is possible to enjoy a wide range of coordination, especially for women.

The kimono was traditionally worn by commoners or as an undergarment of Japanese nobility. Despite its simple structure, the kimono is a powerful symbol of Japanese heritage.

While yukata has its origins from the word Yukata Ira which was worn to protect a person’s body from burn injuries from the steam while using the steam baths in the Heian Period of Japan.

The Yukatabira then were used to wipe water much the same as a bathrobe after bathing. However, what is referred to today as a Yukata, is completely different from what it was known as in the past. Yukatas can be used as some sort of pajamas or can be worn to festivals depending on your fancy.

The most apparent distinction between  Yukata vs Kimono is probably that the kimono usually has an interior lining, whereas yukata never do, and are sewn from a single layer of fabric. Kimonos are more complex than Yukatas.

They require three to four strings to close it hence they are more difficult to wear. They also require many accessories and are paired with a formal or semi-formal obi, depending on the occasion. It is also paired with zori and tabi (traditional Japanese socks worn with thronged footwear such as zori)

As opposed to Kimonos, Yukatas are much easier to wear, and need only one or two strings to tie them. don’t require as many accessories as a kimono.

They don’t need a specific undergarment to be worn with it, a Yukata is paired with a casual obi or sash (an important piece of the traditional Japanese attire) which is easier to tie.

Since it is more acceptable to play with an informal obi, Japanese girls often tie it in self-invented and original styles. The yukata is worn together with geta (a form of traditional Chinese footwear that resembles both flip-flops and clogs) and bare feet.

Kimono and yukata are suitable for different occasions. Generally, kimonos are worn for more formal occasions. Some notable ones are Seijin Shiki, seijin meaning adult, and shiki meaning ceremony. Seijin shiki is therefore a coming of age ceremony for welcoming young people to adulthood.

To be eligible for this ritual, an individual must have become 20 years old anytime between the 2nd of April of the previous year and the 1st of April of the present year. Other occasions to wear kimonos are weddings, graduations, and ceremonies at temples and shrines.

Yukata are worn in onsen (Japanese hot springs and the bathing facilities and traditional inns around them) or ryokan (a type of traditional Japanese inn that typically features tatami-matted rooms, communal baths, and other public areas) to attend matsuri (Japanese festivals) or worn more casually in the summer months to attend firework displays.

As they are less formal, they tend to have bright patterns and colors. Still, anybody can wear kimonos and Yukatas whenever they want for whatever occasion. Such is the case in Japan. Also, even though it’s less common nowadays, some people still wear casual types of kimono for day-to-day activities.

Another identifiable difference between Yukata vs Kimono is based on the season in which they are worn. Yukatas are made of a light material, making them better suited for summer.

The blue and white cotton yukatas do more than keep the wearer cool, the natural blue dye contains an element that repels mosquitoes, and, as a result, the Japanese came to wear a predominantly blue yukata during the day when insects were particularly prevalent, and a white yukata at night.

Today the yukata is probably the best kimono to buy for the visitor. These boldly patterned versions come in three styles. And unlike many varieties, yukatas are inexpensive, practical, and can be worn by both men and women.

While the Kimono is made of a thick layer of silk hence they are better suited for winter, yet some kimonos are accessorized with fur shawls and alike to make it more suitable for all weather conditions However, for occasions when a kimono is worn in summer, there are shorter kimonos. It is important to match both kimonos and yukatas with the seasons and environments. Brighter shades of yukatas like yellow and blue are perfect for summer.

READ MORE:  What Are The Best Ramen in Japan?

During autumn, red, dark green, and brown are suitable kimonos to wear. While during the colder months of winter, darker shades of kimono-like dark red and black are ideal, likewise floral and pink kimonos should be worn during spring.

Kimonos are the more customary and high-priced garments. Occasionally made of brocade or more popularly, silk. The traditional kimono is worn with at least two collars. As silk is considered a more luxurious material, this is evident in the patterns of the kimono.

Unlike the Yukata which was initially made to be worn by Japanese aristocrats after taking a bath to cool down. As they were primarily used for this purpose, yukatas are typically made from cotton or polyester mostly because it’s one of the most comfortable and breathable fabrics, optimal for Japan’s long hot summers.

Cotton is quick to dry, making it the best material for absorbing what little water that remains on the body after taking a bath. Modern yukata designed to be worn at festivals are also sometimes made from synthetic materials, which can be even more efficient than cotton at evaporating moisture away from the body. Hence, they are more affordable than kimonos.

However, both kimono and yukata can be found in variations of polyester, cotton, and silk today, depending on whether you are looking for something traditional or something more commercial.

A very important difference between Yukata vs Kimono is the price. Kimonos are generally more expensive than Yukatas although kimono and yukata costs can differ vastly.

A simple yukata can cost as little as thirty dollars while the most expensive Kimonos designed by Japan’s most famous textile artists whose work is regarded as art can cost as much as a hundred thousand dollars.

The price of the material depends on the dyeing process and design quality. The cost of a silk machine-printed variant for everyday wear is significantly more expensive, priced at about two hundred and forty-five dollars, while the average formal kimono is in the eight-hundred-dollar range.

There is a polyester material designed to imitate silk called Sillook. Kimonos and Yukatas made from this fabric are in the one-hundred-and-fifty-dollar range and appeal to many women these days.

Real silk, on the other hand, remains the most popular material for kimonos including crepes, the popular squeezed silk, and the remaining thirty-six different types of silk. The total of an average silk Kimono garment which includes all its accessories, not excluding sewing charges is about four hundred dollars.

In conclusion, Yukata vs Kimono are important Fashionable outfits that have a powerful way of reflecting the culture and history of Japan.

By exploring the history of the kimono and the yukata, and by learning about how they have been worn over centuries, an individual will not only gain insight into the history of ancient Japan but also discover the changes Japanese society has gone through and how its traditional dress has reflected this.