There is so much depth in the tradition, and beliefs of the Japanese. From belief in the supernatural to gods, death, afterlife, and then to yurei. All these are part of what shapes their unique culture. One reason why they celebrate the Obon festival to honor their ancestors.

Yurei; the Japanese ghost is a history passed down from generation to generation. In Japan, it is believed that we all have a God within us. So when we die, the God in us breaks free from our bodies. Unleashing our spirits who typically have to reach the afterlife. If a spirit is unable to do this, (reach afterlife) it becomes a yurei.

So in this post, we will tell you all you need to know about the Japanese ghost.

Yurei is popularly mentioned in Japanese ghost stories. Part of the Japanese horror tales that would keep you up at night. The name consists of two meanings “yu” meaning dim and “rei” meaning soul or spirit.

Yurei are ghost figures that roam the earth. They are haunted spirits, barred from a peaceful afterlife and they unleash their anger on the living.

There are so many tales of how yurei have haunted the living, to avenge their death. It is even believed that they cause disasters like floods and hurricanes. Yurei can arise from cases like murder, suicide, or painful death. Particularly, if they are killed out of jealousy or committed suicide due to family pressure or other reasons.

Whether or not they still exist or are mere myths and legends, they are a great part of Japanese heritage.

The belief in death in Japan

Before we delve fully into the yurei story, let’s take a brief stop at what death means in Japan. With this, you will understand better how yurei exist.

The deceased are truly of great relevance to the Japanese, almost as much as those who are living. In the Shinto religion, every human has a soul (reikon) which leaves their body the moment a person dies. Usually, rituals are done for their spirit so they can become protective ancestor deities (kami) to their families.

If their death rites are not properly carried out or the spirit has any lingering business, a yurei is born. This is why in Japan, a ritual is done by living relatives after a family member dies. This way, they pay their respects to the dead, accompany them and help them on their journey to the afterlife.

Once their journey is successful, the spirit now watches over their relatives on earth and protects them from bad luck. Well, if this doesn’t happen, due to certain reasons, yurei will linger on earth until they have solved their earthly business. 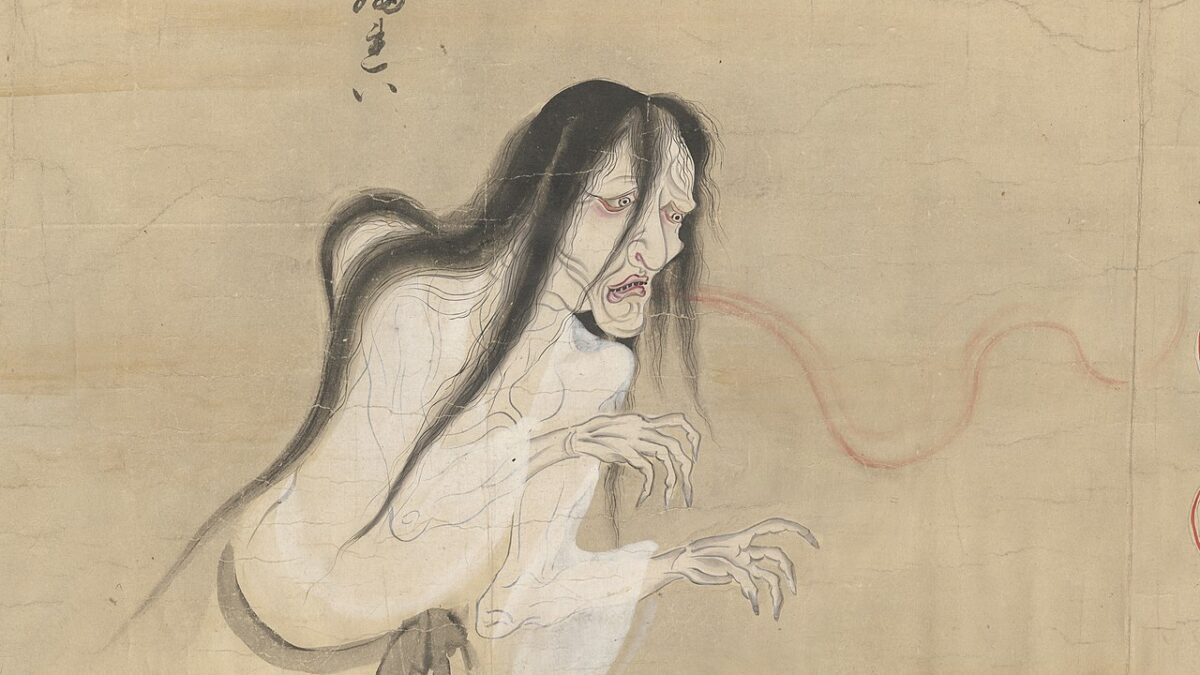 A yurei has a human figure but without feet. Typically how you would describe a ghost; floating in the air. They have long black hair that hangs in front of their faces and pretty much wear a white kimono that was used during their death rites. Yurei is mostly female though males also exist.

What’s more, they take the form they were in when they died and are bound to specific objects or places. So if a yurei was deformed when she died, she would technically take that form. However, they can take other forms when they are on a mission for vengeance.

Sometimes people who learn about this Japanese ghost tend to mistake the Yurei with the Yokai. But they are not the same. While yurei are dead spirits, yokai are very much living. They are supernatural but earthly beings. With this description, you can tell if you’ve seen a yurei.

Yurei are of different types

Yurei are of differing types. It all depends on their agony on earth or the intensity of their death. Some are very destructive, while others, not so much. For instance, Onryo yurei are vengeful spirits who died harboring resentment or anger for someone.

Other types of yurei include Ubume, zashiki-warashi, floating spirits, earthbound spirits, and funayurei. Ubume yurei are ghosts of mothers who died during childbirth but came back to take care of their children. They often bring sweets.

Zashiki-Warashi is the ghost of children. They are more mischievous than vengeful. Floating spirits on the other hand are known to often wander aimlessly.

Earthbound spirits like floating spirits do not have any aim. They are often bound to specific places. An instance is the famous story of Okiku. Funayurei on the other hand are spirits of people who died at sea.

It is believed that most yurei are females. This is because women are more emotional than men and are capable of having strong emotions that could prevent them from reaching the afterlife. This is believable because most J.Horror dramas have depicted yurei using women.

You should know that not all yurei are female. Though popular stories recounted have female characters, male yurei exist. As much as most famous Onryo are female, there are male onryo too. Especially those who died from the aristocratic family.

For instance, Sugawara no Michizane unleashed vengeance after dying in exile. It was believed that he caused a string of disasters and the unfortunate deaths of his political rivals. Until his soul was appeased when he was deified as Tenjin.

Traditional folklore and legends of yurei

When it comes to maintaining culture and tradition, folktales and legends are used to pass down beliefs from one generation to the other. The Japanese yurei myth is no different. Horror stories have been used to talk about the strengths and wrath of the yurei.

In the ancient Kojiki, a popular Japanese tale, characters are used to represent yurei. This ancient story is a chronicle of myths, legends, and accounts of Japanese history as far back as the 8th century.

Let me add that during the Edo period, horror stories became quite popular. Some of these popular yurei stories that spread across Japan include San O-yurei, the three ghosts. Where the first ghost is Oiwa (yurei of hatred), the second is Otsuyu (yurei of love), and the third, Okiku (yurei of torment).

The story of Okiku’s ghost is quite a popular one. Okiku was a servant in a big mansion, the Himeji mansion (according to popular belief) where she worked for a wealthy family.

Up until now, the Himeji mansion is believed to be where Okiku’s spirit dwells.

The wrath of Yurei is greatly feared by Japanese people and over the years, they have developed religious practices to appease angered spirits. Like devoting temples to these troubled souls. An example is the Yasukuni Shrine in Tokyo dedicated to World War II soldiers who died during the war.

If you doubted the credibility of the existence of Yurei, the 2011 Tohoku earthquake and tsunami would make you change your mind. According to reports from Richard Llyod Parry a reporter for the Times of London in Asia.

He was able to uncover stories of wives seeing their husbands who died during the disaster. He was also able to gather that some fire departments received distress calls from houses that no longer existed.

The adaptation of yurei as villains in J.Horror

There are a lot of J.dramas and series that have adopted the yurei character. And thanks to J dramas, Yurei has become known across the globe. Even films from other countries have made adaptations of J.Horror dramas that use Yurei as the villain.

Series like The Terror: Infamy, uses the Japanese legend yurei. Other films where yurei have been featured include; the popular film The Grudge – which is an American adaptation of the Japanese series “Ju-On” The Ring – a Japanese movie of 1998 adapted by America. The Ghost, Jiko Bukken: A House with Dark Past, Apartment 1303, Dark Water, and One Missed Call are other dramas where the yurei character was featured. You can check these movies out if you are a fan of J.Dramas, particularly horror films.

Yurei is part of Japanese history, tradition, and religion. Some of their religious festivities are in line with their belief about the yurei. Do yurei still exist in the present day? Well, some Japanese locals will tell you about their experience with Yurei.